Unlike Virgin, British Airways has refused to stop deporting people 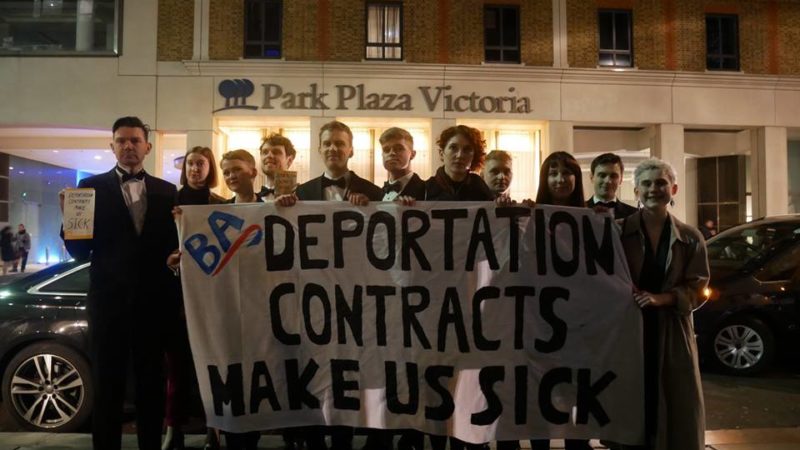 Like the airline executives, the protestors dressed in black tie to gain entry to the Park Plaza Victoria hotel.

Once inside, they handed out sick bags to delegates, took to the stage and unveiled a banner saying “BA: deportation contracts make us sick”.

British Airways, whose CEO was in attendance, was a particular target of their protest. Unlike its rival Virgin, British Airways has refused to stop allowing its planes to be used to deport people from the UK.

In 2010, a man called Jimmy Mubenga suffocated while handcuffed on a British Airways flight whilst being deported. Three G4S guards were charged with manslaughter but acquitted.

Deportations are a money-spinner for airlines. In 2015-2017, the government gave airlines £52m to deport people.

Until it was ruled unlawful in June 2017, the Home Office operated a policy of ‘deport first, appeal later’. This means that many of those deported will have had active appeals. About 43% of appeals against Home Office initial decisions are succesful.

In March 2017, 15 activists stopped a deportation charter flight from taking off from Stansted to West Africa.

One of those due to be deported was a lesbian who was claiming asylum because in some states of Nigeria homosexuality is punishable by death.

She feared that, if she was deported, either the authorities would find her or that her ex-husband, who she had been forced to marry, would. He had said that he would take revenge by murdering her. On the Detained Voices blog, she wrote:

Also scheduled to be deported on that flight were two people who had been trafficked to the UK against their will and were being sent back to the country they were trafficked from – increasing the chances they would fall back into the hands of their traffickers.

Eleven of the migrants on board that plane are still in the UK nearly two years later and two have been given permission to stay in the UK permanently.

British Airways did not reply to an email requesting comment.