We look at the front-runners for a potential Tory leadership contest - and their disturbing records. 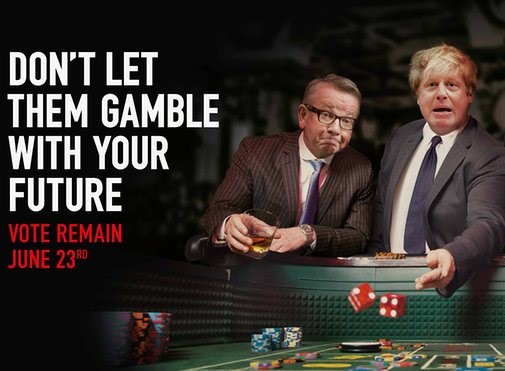 Pic: A Remain campaign poster from 2016 is looking remarkably prescient…

The PM faces a leadership challenge tonight – and the front-runners for a potential contest are starting to emerge. With that comes scrutiny over some shoddy records and views.

A recent report by campaigners at For Our Future’s Sake revealed the right-wing agenda of leading Brexiters. Among the worst culprits are those who could seize the crown from May.

Here’s the top front-runners, with odds taken from Ladbrokes at 10am. A secret ballot of MPs will take place on Wednesday night.

Other frontrunners include hard-Brexiteer David Davis (16/1) – one of the first to storm out of Cabinet – and Commons leader Andrea Leadsom (25/1), known to back a harsher form of Brexit than that pushed by the PM.

David Davis has previously said he was “agnostic” about whether climate change was real, making him a potential climate disaster if elected. He has also previously backed a ‘Mandate’ referendum on the Brexit deal – before going on to attack it.

Andrea Leadsdom has said she would like to ‘scrap the entire burden of [EU] regulation’ – otherwise known as workplace and environmental rights – and have ‘absolutely no regulation whatsoever’ for small companies.

What a lovely bunch!