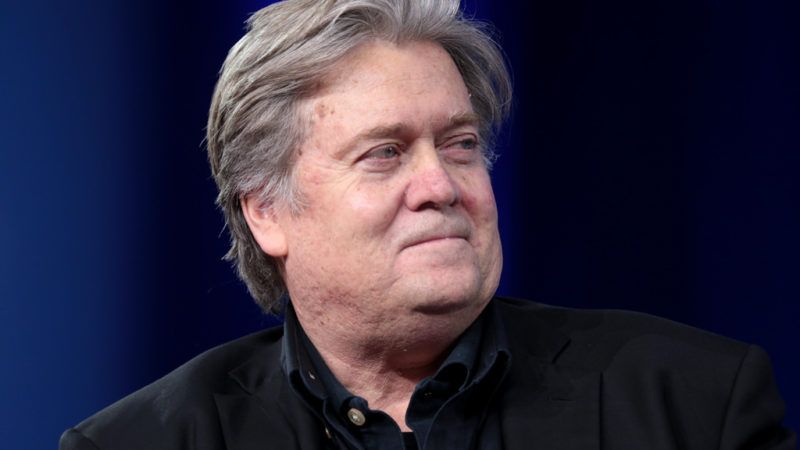 The Oxford Union debating society is today hosting none other than the white nationalist, Steve Bannon.

Bannon, who has previously acted as former chief strategist in the Trump administration, was formerly chairman of far-right propaganda and ‘click hate echo chamber’ outlet Breitbart and has described violent thug and extremist Stephen Yaxley-Lennon (‘Tommy Robinson’) as ‘the backbone of this country’.

He told an audience of the French Front National to “let them call you racist…wear it as a badge of honour.” He will no doubt now be rubbing his hands with glee at the invitation from the Oxford Union.

Like other such figures presented with such an opportunity, Bannon is sure to milk the publicity for all it’s worth and exploit the ‘faux-debate’ legitimacy that such an invitation provides.

This is very familiar territory for the Oxford Union. Infamously, it invited the convicted fraudster Yaxley-Lennon to speak in 2014 (his speech has now been watched over 1.2m times on YouTube) and Marine Le Pen of the far-right Front National in 2015.

Not only that, but back in 2001 it extended an invitation to notorious British Holocaust denier David Irving before, again, being told by anti-racism campaigners that perhaps welcoming a man who had spent decades dedicated to spreading poisonous, anti-Semitic hate and historical revisionism was not the best idea they’d ever had…

Bannon’s invitation comes at a particularly opportune time. Next year will see the European Parliamentary Elections, an explicit target for his putative organisation, The Movement, which he claims to have established to both support and influence the campaigns of nationalist parties across Europe.

In celebration of one of his new political acquisitions, Bannon posed for a photograph with Matteo Salvini (captioned ‘He is in!’), the far-right Deputy Prime Minister of Italy. Recently, footage has re-emerged of Salvini, stating of the country’s Roma communities, “we need a mass cleansing, street by street, piazza by piazza, neighbourhood by neighbourhood”.

But there are still doubts about The Movement’s funding and support, with several radical-right populist parties refusing to sign up: that’s why Bannon has welcomed opportunities to speak at events hosted by respected outlets such as The Economist – it lends legitimacy to his toxic message of division and intolerance.

Several speakers refused to appear alongside him at The Economist’s event, and others threatened to quit a similar event being held by the New Yorker festival (Bannon’s keynote invite was later withdrawn).

Despite this and despite the clear evidence of the trail of misery and division spread in the wake of this new breed of far-right rhetoricians, there are still those falling over themselves to give these characters a free platform.

For Bannon his invitation to speak at the highly-respected Union is another step forward in his culture war and attempts to drag the political debate further rightwards. It is a battle he has been waging for years.

Breitbart, where he was previously chairman, has been described by my colleagues in the HOPE not hate research team as an organisation which:

“makes political and economic profit from ramping up fear and mistrust and increasing societal division via its often wildly exaggerated, hyperbolic, inaccurate, prejudiced or even manufactured content […] its political aims are to undermine and destroy the liberal democratic progressive consensus – understood as left-wing cultural hegemony – and the societal norms which are derived from it.”

Bannon’s political and cultural strategy, whether that be at Breitbart, at the right-hand of Trump or in the guise of his new ‘Movement’, must not be divorced from this analysis. It is a worldview which has been transported with him into each of his ventures, incorporated into whatever vehicle of which Bannon is able to get behind the wheel.

With all this in mind, it is baffling that there are those like the Oxford Union which continue to provide figures like Bannon with the opportunity to promote their message. For the people at the Union, perhaps this must all seem like some form of game, an opportunity to skewer Bannon with a ‘zinger’ of a question: but this is a fantasy. For Bannon, politics is a war. A war in which one ‘[weaponises] the narrative you want to advance’. Simply ‘challenging’ his views in a debate will not stop them being spread via this platform.

As Bannon prepares to park his tanks on the neatly-trimmed lawn outside the Oxford Union, the question has to be asked whether the public debate would be better served by the Union raising up the voices of those working to bring society back together, rather than chasing infamy and pushing those looking to drive us further apart.

One Response to “Politics isn’t a game, stop inviting white nationalists to the Oxford Union”