They're the new activist group who took on the Democratic Football Lads Alliance. And now they're gearing up to oppose the far-right's 'racialisation' of sexual violence. 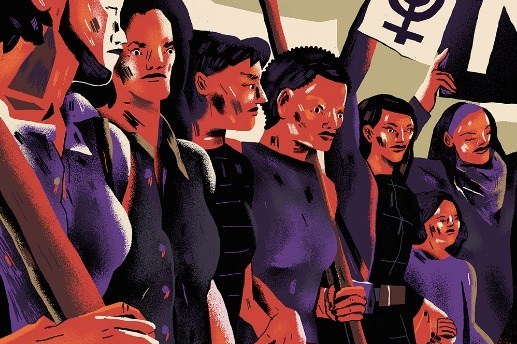 Join the Feminist Anti-Fascist assembly for a demonstration in London on Sunday 25th, the International Day to Eliminate Violence Against Women.

Last month, 800 women and non-binary people loudly and proudly led a group of 1,500 anti-fascists to block the route of a march organised by the Democratic Football Lads Alliance (DFLA), making it the largest and most successful anti-fascist mobilisation in London in recent years.

Feminists to the Front on October 13th grew from our collective feeling that it was necessary to oppose and physically block the far right on the streets.

The DFLA were outnumbered as a result of coordination between groups such as the Anti-Fascist Network, Plan C, Sisters Uncut, Football Lads and Lasses Against Fascism and others.

In cities across the country, far-right groups like The Democratic Football Lads Alliance (DFLA) have been marching in the tens of thousands, proclaiming to protect women from ‘Muslim grooming gangs’ and violence which they claim is ‘imported’ from abroad.

While they treat sexual violence as a question of race or religion, we know that in overwhelming majority of cases sexual violence is committed by someone in our everyday lives and that perpetrators come from all class and cultural backgrounds.

These far-right marches normalise racist ideas, making it more difficult to confront the reality of how devastatingly widespread sexual abuse is. What is clear is that survivors of abuse are not believed or provided with appropriate levels of care and support when we speak out about abuse and rape.

The Feminist Anti-Fascist assembly is a coalition of feminist and anti-racist groups and collectives, as well as a space for women and non-binary people from across different political movements.

The assembly aims to be a political and physical response to the far right: fighting their ideas of sexual violence as something specifically perpetrated by black and Asian men, and building a mass street movement in opposition to the far right that is both militant and joyful.

We began holding feminist open meetings in the summer. In these meetings, we spoke about what ‘violence’ really looks like in our everyday lives and our communities. It became clear that women are targeted by abusers of all backgrounds and from all communities and that the state systematically fails to protect women from violence — and in many cases it is the police and immigration officers who are complicit in abuse .

At the heart of the far-right vision for society is not only racism but also increasing patriarchal  power. The Feminist Anti-Fascist assembly demonstrates that women are not defenceless victims in need of (white) male protection as imagined by the far right.

Instead, we – a coalition of sex workers, trans women, non-binary people, survivors of domestic abuse and migrants – are perfectly capable of taking care of each other and coming together to fight all forms of violence and abuse in our communities and workplaces.

Anti-fascist action is always a form of community self-defence and working-class solidarity — and our aim is to build on this tradition and to put feminism, care and accessibility at the centre of our organising and actions.

Feminist anti-fascism makes it explicit that the scapegoating of black and Asian men for sexual violence in the UK lets the real perpetrators of austerity and violence off the hook: it is the state, police and social services that have failed us. To address this, feminist anti-fascist action must aim to do more than physical confront the far right on the streets.

The first step is to hold assemblies and discussions with women in communities across the country. In particular, we will be organising in places such as Huddersfield, Sunderland and Rotherham which have become central to the far right’s racist mobilisation around sexual violence.

These meetings will be a space for discussions about how we can come together to meet community needs and support survivors. We will talk about sexual violence on our own terms, not as part of a cynical campaign of racism and sexism. Together we can all be stronger.