Persuading MPs is vital if we want a referendum 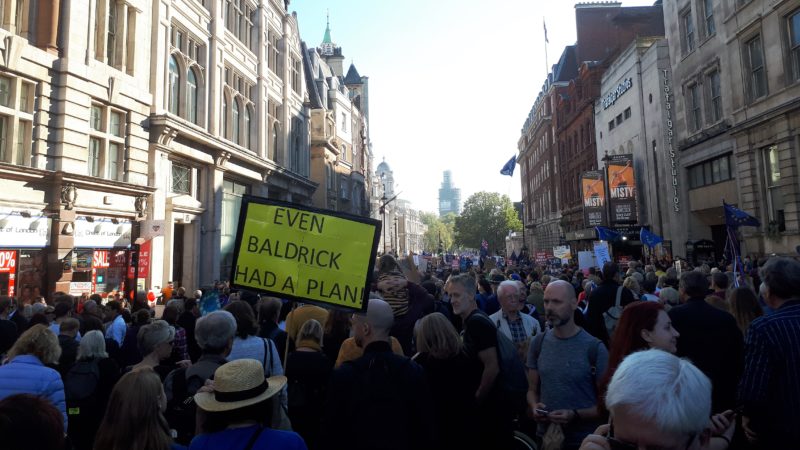 It is often said that successful political campaigns ‘own the future’, but in a week that saw 700,000 people march for a People’s Vote, we need to start by recognising how far the Pro-EU movement has come since the start of this year.

When I founded Remain Labour in December 2017, the ‘People’s Vote’ campaign didn’t exist, the most outspoken Labour MPs were campaigning to preserve our place in the single market and the Labour leadership was emphatically opposed to a referendum.

Ten months on, we have a People’s Vote campaign making the political weather, dozens of Labour MPs and the Mayor of London signed up as supporters and a standing ovation for Keir Starmer when he told Labour Conference that “nobody is ruling out Remain”.

When I drafted the Remain Labour mission statement back in December, I said that ‘Brexit can be stopped, but only through the leadership of the Labour Party’. I believe that is still the case. T

he People’s Vote campaign has brought together people from all political parties and none and it has been inspiring to see young people from ‘Our Future Our Choice’ and ‘For Our Future’s Sake’ in the vanguard.

We have a movement primed to win a People’s Vote, but without support from the leadership of the Labour Party – we will not have the chance.

To ultimately win in the country, we first have to win in parliament. We can only win in parliament with Labour MPs voting to reject any Brexit deal put forward by Theresa May and then voting in favour of a People’s Vote with the option to Remain.

To make this a reality, Remain Labour is focused on three priorities:

Labour policy moved forward at party conference in Liverpool (you can read my account of the famous compositing meeting here) but the leadership is committed to calling for a General Election before it backs a People’s Vote.

In the febrile atmosphere in Westminster, it is possible that Theresa May could lose a vote on her Brexit deal, lose the confidence of parliament and stumble into a General Election.

In that scenario, we need a guarantee that Labour will not attempt to negotiate a ‘better form of Brexit’, but will go to the country with an explicit commitment to holding a People’s Vote with the option to Remain in the EU. Our petition is only a week old, but growing fast.

Remain Labour is a non-factional group, with supporters from all traditions in the Labour Party. Some of our supporters are Momentum members and they have a big part to play.

Momentum has just launched an all member consultation on Brexit. If that consultation comes back with a clear endorsement of a People’s Vote, the leadership of the party will undoubtedly feel the pressure to respond.

For wavering Labour MPs to come to endorse a People’s Vote, they need to hear the message loud and clear from their constituents and local members.

From Reading to Rother Valley, from Westminster to Wolverhampton, Labour voters who want the chance to Remain in the EU need to make the case in person to their MP.

It is no exaggeration to say that this could all come down to a handful of votes in the Commons and every constituency surgery you attend or e-mail you write will strengthen the resolve of MPs to act.

We have come a very long way since December 2017. If we win in parliament, we can get the whole way to a People’s Vote by December 2018.

3 Responses to “To win a People’s Vote in the country, Labour MPs have to win in Parliament”