iFM Bolton risked undercutting NHS terms and conditions - and sparking a race to the bottom. But Unison put up a strong challenge - and won. 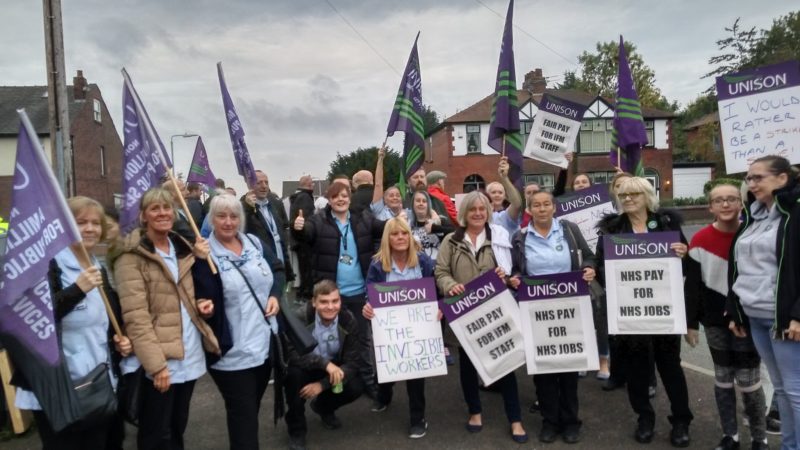 Trade unions had been warning for some time that the creation of ‘sub-cos’ – NHS-owned, arms-length companies – could pave the way for NHS organisations to gradually undermine pay and conditions.

iFM Bolton was set up last year, transferring nearly 300 NHS staff from the NHS to the new company. As a separate entity, the organisation has no obligation to meet national NHS pay rises.

Facilities staff are among the hospital employees celebrating the agreement, which will see their minimum wage rate increase from £7.83 to £8.95 immediately, and reach £9.92 by the end of 2020.

At packed meetings on Thursday and Friday, Unison members voted unanimously to end the dispute as the employer offered to pay national NHS Agenda for Change rates to all iFM staff. It had previously refused to do so – but backed down under pressure.

Vicky, a cleaner at Royal Bolton Hospital and a Unison rep, said:

“We all work in the NHS. It is only right that we will all be on NHS pay.  We are no longer invisible. We are strong and proud. We stuck together and we won.”

“We are pleased to have been able to work constructively with Unison to agree a new three year pay deal and to resolve this dispute.

“We value our staff and recognise the contribution they make to helping patients and serving the local community. We look forward now to working with our employees and Unison as critical partners in the success of iFM Bolton.”

Unison had previously given iFM Bolton notice that a further three days of strike action would take place on 23-25 October if this issue is not resolved.

“The victory in Bolton should send a strong signal to any NHS trusts who think creating a wholly owned subsidiary will allow them to short-change their staff over pay.

“Anyone who provides a service to the NHS should get the same wage rises as the health colleagues they work alongside.

“The hospital workers employed by iFM do work that’s at the heart of the NHS. The move by iFM to try to deny them their share of the national NHS pay deal was quite simply immoral.

“But the employer wasn’t banking on the determination and solidarity of Unison members in Bolton, who have been unflinching in their stand for fair pay.”

“This is a great result and it has been achieved by the unity and determination of the hospital workers. The campaign for fair pay in Bolton has been widely supported – by MPs, by the public, and by hospital staff not directly involved in the dispute. Everyone has acted in unison to ensure that all hospital workers will be paid the NHS rate for the job.”

A second wave of strike action scheduled to begin this Tuesday will now not take place.