The Chancellor was in full boasting mode over the use of controversial Private Finance Initiatives on Monday.

He told the Commons:

“​I have never signed off a PFI contract as Chancellor, and I can confirm today that I never will. I can announce that the Government will abolish the use of PFI and PF2 for future projects, putting another legacy of Labour behind us.”

Except, without cancelling existing contracts, PFI is with us to stay – for many decades to come.

New analysis from the House of Commons Library shows the extent to which these costly public sector infrastructure financing deals will continue to burden us for years, unless action is taken now.

In a piece for the House of Commons Library site, Lorna Booth – Head of the Economic Policy and Statistics Section – writes:

The last PFI payment is due in 2049/50, for the Oxleas NHS Foundation Trust PFI – this is an unusually long contract, which was signed in 1998 and was for 52 years.

Labour under Jeremy Corbyn has pledged to scrap existing PFI schemes, a move backed by parties like the Greens.

But Hammond has point-blank refused, saying it will cost billions to buy the public sector out of the existing deals.

Instead, the Chancellor pledged a ‘Centre of Excellence’ to look at existing contracts. There’s little information about what this Centre might actually involve.

As of March 2017, there were 715 current PFI and PF2 projects. 699 projects were ‘Operational’ and 16 were under construction, according to government figures.

Yet as Treasury data shows, this is set to remain depressingly consistent over the next decade. By 2028, we’ll still be forking out billions on nearly 600 of these projects. And by projects, we mean schools, hospitals and vital infrastructure that taxpayers are being charged through the nose for.

PFI conveniently keeps public debt off the official records. But it does so at a crippling cost to our public services.

The existing PFIs are hitting the NHS hard. The most recent Treasury data shows there are 127 NHS PFI projects, down two in a year after the collapse of Carillion ended deals at Royal Liverpool and Midland Metropolitan hospitals.

120 of these will still be paying increasing sums each year in 2028-9, NHS campaigner and academic John Lister tells LFF.

Figures gathered by Unison show the scale of PFI payments across the public sector are barely set to drop in the next ten years: 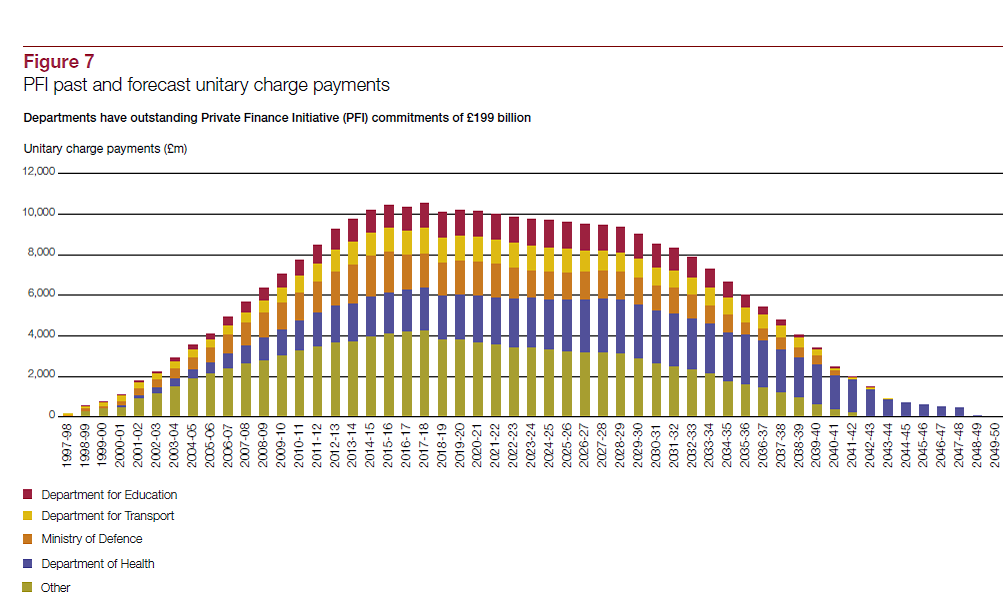 A spokesperson for Unison said Hammond was now making arguments the union has been making for over 25 years, but added:

“The Chancellor did not go far enough. He told Parliament he remained committed to the use of Public Private Partnerships (PPPs), which is simply PFI in a different guise.

“He failed to put in place measures that promote quality and best practice in public procurement and in-house service delivery. And he ruled out taking steps that would a) bring existing PFI contracts to an end, b) transfer the assets to the relevant local authority, NHS Trust or government department and c) bring the services in-house.

“In 2027/28 there will still be 600 PFI schemes in operation and the nation will be spending almost £10bn a year in unitary charge payments on PFI contracts.”

The union are calling for transparency over Public Private Partnerships – joint financing ventures not touched by the Chancellor’s budget:

“While there is a Treasury database of PFI contracts, no such database exists for PPP contracts and there is an urgent need to establish one so that there can be public scrutiny of those, potentially equally flawed, arrangements.”

Dr Helen Mercer from the University of Greenwich points out that: “Hammond’s proposal [of no new PFI contracts] is only making a virtue out of the de facto situation: PFIs are hardly being signed any more and those that are, like the West Midlands and Royal Liverpool hospitals are requiring taxpayer bailouts.”

People vs PFI has promoted the proposal to nationalise the Special Purpose Vehicles (SPVs), which has now been adopted by Shadow Chancellor John McDonnell.

According to a recent study, it would cost £2.5bn to buy the assets of the SPVs – but £1.4bn per year would be saved for public services through capturing profits previously reaped by the private owners of the SPVs. That’s a million miles off the Chancellor’s claim that PFI deals would cost ‘£200bn to pay off’ and scrap them.

The Chancellor’s ‘announcement’ that there’d be no new PFI projects changes little – while our public services are forced to pay out to investors for decades to come.