From new policies on well-being to debates on antisemitism, here's some highlights from the Green Party of England and Wales' gathering in Bristol at the weekend. 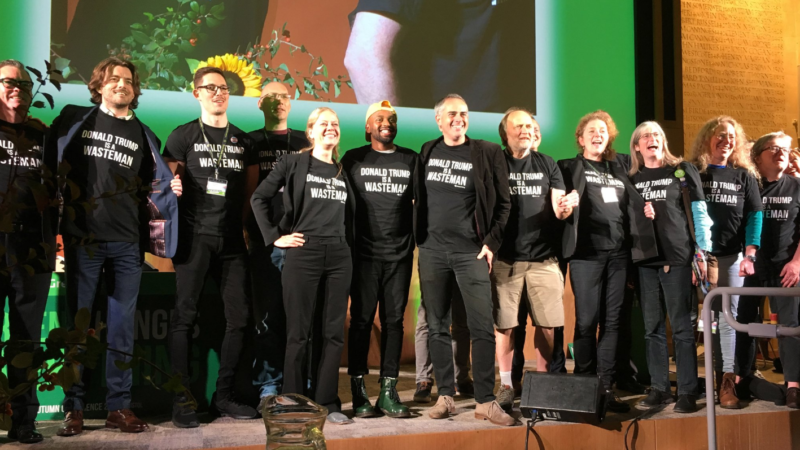 The Green Party of England and Wales’ autumn conference over the weekend saw key developments on Brexit, economic policy the party’s internal structures and much else besides.

Here’s some (non-comprehensive) highlights from the party’s gathering in Bristol:

Perhaps unsurprisingly, Green members overwhelming voted to back a so-called People’s Vote on Brexit – with the option to remain in the EU:

Great to see #GPConf vote overwhelmingly to commit @TheGreenParty to fight for a #PeoplesVote and to fight to #Remain in the EU pic.twitter.com/mUCqyeJaoN

“We cannot leave this to the Conservatives or give them a blank cheque on a deal. Across the country, the people of Britain are demanding a democratic final say on the Brexit deal, with the option to remain inside the European Union.

“Democracy didn’t end in 2016 –  it was the start of a process. Support for a people’s vote is growing and it now feels unstoppable.”

2. Trump is officially a ‘wasteman’

Earlier this year the new Green Lord Mayor of Sheffield Magid Magid made headlines internationally when he declared: “Donald Trump is henceforth banned from the great city of Sheffield” and called him a ‘wasteman’. The Greens have now turned it into a t-shirt…

For many years it has been a tradition for some very dedicated members to raise the issue of a Universal Basic Income at every fringe session. This autumn conference was no exception.

Clive Lord was one of the first members of the PEOPLE Party, which later turned into the Green Party – and he kept a UBI on the agenda this time…

A #gpconf tradition – longest-serving @TheGreenParty member Clive Lord talking about #universalbasicincome – a policy that was in our first manifesto and has continued ever since pic.twitter.com/11ou1N5Nqs

As the new co-leaders set out in an interview with Left Foot Forward last month, the Greens have set a target to become the third party of Britain:

ICYMI: We are putting the other parties on notice. We will be England’s third party. #gpconfhttps://t.co/fPBSTEtyiM

Conference voted to ‘refer back’ two motions on antisemitism and the International Holocaust Remembrance Alliance’s definition.

As Left Foot Forward revealed last month, the party was set to discuss adopting a version of the IHRA definition, following concerns of antisemitism in the party.

There was a counter-motion by former Deputy Leadership candidate Shahrar Ali, rejecting the IHRA definition as a ‘threat’ to criticism of Israel.

Conference voted to ‘refer back’ both motions – despite the IHRA motion having significant support from the leadership – to give more time to discuss the issue.

Palestine flags were reportedly placed around conference at the time of the vote:

This was the done with the explicit intent to intimidate members and to try and force the motion in support of the #IHRA definition of anti semitism to fail. There’s no place for this in @TheGreenParty #GPconf https://t.co/hrWMPz93wz

Conference voted to back the party’s Holistic Review of its internal structures, paving the way for an overhaul of how the party is run. It will now go to members for wider consultation. Watch this space for more info on what it means for the party:

Full house for the plenary session deciding over the Holistic Review #gpconf pic.twitter.com/ddkudvFgpk

As this site has covered, a debate on gender and trans issues has been building in the party in the wake of the Aimee Challenor scandal. The former Green spokesperson left the party citing ‘transphobia’ after an investigation was launched into how/why she appointed her father as election agent twice after he was charged with multiple sexual offences.

Many Greens were spotted wearing these badges at conference:

We’ll be challenging dangerous TERF rhetoric at conference and we are asking our supporters to do the same.#gpconf pic.twitter.com/TVpyzn189r

Yet some Greens have critiqued the tone of the debate, after Baroness Jenny Jones’ materials were defaced with the word ‘TERF’ (Trans Exclusionary Radical Feminist). Jones has called for an open debate on gender/trans issues:

Just found these on @GreenJennyJones‘s stall, which was temporarily not personned. Someone has defaced all her fundraising leaflets with the epithet ‘TERF’.
This really won’t do. This is unGreen, rude & cowardly behaviour.
We need to renew our Party’s ethos of mutual respect. pic.twitter.com/xWX6tD0kJ0

1) These three @fairplaywomen supporters have been leafleting outside the Greens party conference. Transactivists called the police. Within 5 mins 4 police officers turned up, then 5 mins later a police horse. pic.twitter.com/3zZODQnNd2

8. A new measure for well-being

In a much-praised move, the Greens have called for Gross Domestic Product – the traditional measure of economic success – to be replaced with a measure of Free Time:

“The Free Time Index would count the hours people are not at work – or doing work on a long commute. The time to have a family life, relax, and pursue the things they care about.

“It should be an aim of the Government to see a yearly increase in this Free Time Index, so that the quality of time which is truly our own becomes the real measure of wellbeing.”

The measure of a successful society should be the quality of our lives, not the amount of stuff we buy & sell.

A Free Time Index would help us ensure technology is liberating us – not chaining us to work 24/7.