This year marked the 150th anniversary of the founding Congress, but it also marked the thirtieth anniversary of Jacques Delors’ famous speech. Three decades after Delors, who was President of the European Commission at the time, made a socialist argument for the European Project and won over many in the Labour Party who had previously opposed the EU, Brexit has pushed the issue back up the agenda. 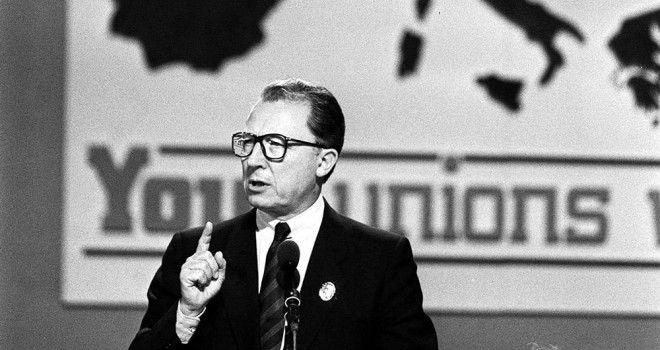 The 2018 TUC Congress, which ended on Wednesday, had particular historical significance.

It marked the 150th anniversary of the founding Congress at the Mechanics Institute in Manchester in 1868. And it marked the thirtieth anniversary of Jacques Delors’ famous speech to the 1988 Bournemouth Congress, where he made a socialist argument for the European Project, which persuaded many in the Labour Party who had opposed it.

Being a Mancunian and a former print worker, I am proud that the two founding fathers of the TUC were officials of the Manchester Typographical Society (a legacy union of Unite – they were also officials of the Manchester And Salford Trades Council). The first TUC congress I attended, as a lay delegate from the National Graphical Association (NGA), was the 1988 conference in Bournemouth.

That 1988 Conference was a turning point for Trade Unions. For years many UK unions had taken a negative approach towards membership of the European Union (then known as the Common Market). A number of unions had opposed joining in the first place and others opposed continuing membership of the EEU/EU and campaigned against Harold Wilson’s re-negotiated deal put to a referendum in 1975. The UK backed Wilson by 67% to 33% on a national turnout of 64%.

Delores, then EU President of the European Commission, spoke to the TUC during the darkest days of Thatcher’s unrelenting attack on workers rights. We had suffered big setbacks (for the NGA) at Warrington in 1983 and Wapping in 1985-86 and for Mineworkers in 1986.

Delors set out radical ideas such as collective bargaining at European level, placing social and job protection at the heart of the EU, and introducing pro worker/ pro family legislation across the bloc.

Not only did his speech prompt a rendition ‘Frère Jacques’ by delegates it lead the then General Secretary of the TGWU, (another legacy union of Unite) Ron Todd, to make it clear that “Europe was the only game in town”. Thatcher’s 1988 Bruges speech was an attempt to stick Delors back in his box.

Thirty years on the Brexit debate at the 2018 Congress was one of the most important ever. The main Brexit debate on Monday was led by Unite General Secretary Len McCluskey who told delegates:

“The vote we will need above all is a general election that can deliver a Labour government. I understand the argument for a so-called ‘people’s vote’ on the deal – on the deal – not on leaving the EU. That ‘people’s vote’ has already happened. And I accept that the option must be left on the table, if for no other reason than as a safety net if Tory MPs become spineless and don’t have the courage of their own convictions to oppose what the prime minister brings back. But let’s focus on the prize – sweeping this government away in a general election and giving a Labour government under Jeremy Corbyn the chance to repair two wasted years of Tory wrangling.”

“The Brexit statement demands MPs reject a disastrous no deal and send a defeated, broken government back to the country in a general election. It demands we extend Article 50 to give an incoming Labour government time and opportunity to negotiate a deal for the many, not the few. And if the politicians can’t do that, then we demand we go back to the people so they can vote on the deal on offer. It’s our deal, our future, not theirs”.

As always the Congress gives unions large and small an opportunity to address many issues from education, to the arts, health and safety, and international issues such as the burning injustices in Palestine.. For Unite, besides Brexit, this included industrial strategy, a demand for a criminal investigation into the collapse of Carillion, equalities, transport, automation and union organisation etc (Unite had 27 speakers, 50% of them women, 15% BAEM as well as young members).

Of nine speakers, only one union spoke against the Composite Motion and the General Council statement, throwing the weight of the TUC and the vast majority of the UK’s unions behind a strategy to defend working people, decent jobs and communities.

In her keynote speech to conference TUC General Secretary Frances O’Grady proposed one of the most radical General Council statements I can recollect on reform of collective bargaining, which when introduced by a Labour Government will reduce inequality, improve working people’s lives, improve productivity, and bring back fairness. I believe it will also prove popular with the general public in the next General Election.

Shadow Chancellor John McDonnell, in his speech to Congress, set out a radical programme on employment law and rights at work. The shadow chancellor said he would produce a new workplace environment, which would boost the UK’s economy. He said:

“Our programme of workplace reform will restore the balance between employer and worker, and it will do so by installing basic trade union rights in law again, modernising corporate governance structures and extending the opportunity for employees to share collectively in the benefits of ownership of their company.”

He told delegates that Labour will ban zero-hours contracts, repeal the Trade Union Act, halt bogus self-employment, end private finance initiatives and set up a department for employment to implement the policies, with a particular emphasis on workers in the gig economy. He promised workers with flexible hours and short-term contracts will be given similar rights to those in permanent work, including eligibility for sick pay, parental pay and similar benefits.

McDonnell also said he had found the “magic money tree – in the Cayman Islands”! All this had right-wing pundits frothing at the mouth – and they had more to froth about with the speech by the Archbishop of Canterbury, Justin Welby.

He received a well deserved standing ovation from delegates for delivering what right-wing press and social media described as a ‘socialist sermon’ calling for the scrapping of Universal Credit, openly criticising companies such as Amazon, Wonga and the ‘evils’ of the gig economy. He also came as near as he could to apologising to the movement for a local vicar who, in 1834, betrayed the Tolpuddle Martyrs to the authorities for forming a union.

UCU General Secretary Sally Hunt had set the scene brilliantly on Sunday with a powerful speech reminding delegates of the proud history of radicalism in Manchester – the Blanketeers march of 1817; the Peterloo massacre; Sylvia Pankhurst, and later heroic strikes by the Bryant and May Match girls in 1888; the Taff Vale railway workers strike in 1900; the women chain makers strike in 1910 through to the Dagenham sewing machinists fight for equal pay in the mid 1960s at Fords and beyond.

I have been attending the TUC Congress for over thirty years (over 20 of them as a General Council member) and it’s noticeable that the size of the Congress reflects reduction of members and union mergers since 1988.

Back then Congress alternated between Brighton, Blackpool and sometimes Bournemouth, it was on the television – live all day, delegates were packed in tight for the big set pieces, the hall and galleries were full (as were the bars), and unions provided a plentiful array of evening receptions and entertainment – lunchtime and evening fringe meetings were not as prominent.

The realities of working life have may have taken a toll, but the atmosphere at the 150th Congress was one of solidarity, a need to rid us of a morally bankrupt and rotting government, a determination to fight back and win a general election – electing a government for the many not the few.

Now on to the Labour Party Conference in Liverpool in a weeks time!