"If anything, the public should be compensated for what’s happened – it’s been an absolute disaster." 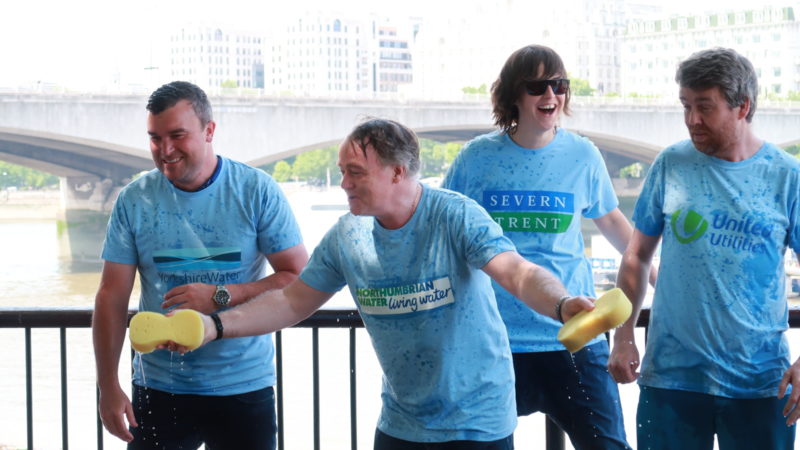 Pic: A ‘Splash Mob’ in London today saw people posing as water bosses get drenched – giving a new meaning to the phrase ‘soak the rich’..

Campaigners are calling for the water industry to be nationalised – without compensation – 29 years to the day since the sector was sold off.

Activists from We Own It and trade unions took part in a ‘splash mob’ to highlight the huge payouts going to water company directors and shareholders – while prices rise for the rest of us.

Decades of sky-rocketing pay and rising bills for the public has led campaigners to say the water bosses do not need compensating if and when a future government takes the sector back into public hands.

The call for zero compensation follows a report by the Social Market Foundation which suggested water nationalisation would cost £90bn – in a report economist and academic Professor Dieter Helm described as ‘economically illiterate’.

We Own It argue it would be up to government to decide how much should be paid out.

Cat Hobbs, Director of We Own It, told Left Foot Forward it was time to end the ‘circus’ of privatisation:

“The water companies have racked up a debt mountain while taking out huge profits ever year, while taking £1.8bn in dividends each year, and while failing to make the investment needed.

“The water companies don’t need to be compensated because they’ve had enough: They were given [the water industry] debt free, and since then they’ve dodged tax, while polluting the rivers and our environment.

“If anything, we the public should be compensated for what’s happened – it’s been an absolute disaster.”

Despite being handed the sector debt-free, water companies have racked up £42bn in debt since then – something that a future government would have to take on.

The market value of water industry shares is estimated to be around £37 billion.

Yet the campaigners argue Parliament can decide on a price that they think is reasonable – taking into account ‘historic government subsidies, environmental degradation and high levels of debt.’

Since water was privatised, bills have increased by 40% in real terms, while it is estimated that public ownership of water would save each household in England £100 a year. Water is already in public hands in Scotland.

GMB and Corporate Watch revealed that the CEOs of nine private water companies have pocketed £58 million in salary, bonuses, pensions and other benefits in the last five years.

There is a growing movement to ‘municipalise’ water ownership – to take it back into local hands. Paris recently took back its water supply, while in the Netherlands and Uruguay, water privatisation is illegal.

Even the right accept support for public ownership is high – the right-wing Legatum Institute found last year that 83% of the public wanted publicly-owned water.

The ‘SplashMob’ campaign is backed by Compass, the GMB, the New Economics Foundation, TNI, Unison and Unite.

The ‘no compensation’ call marks a distinctive shift in rhetoric – getting tough on the companies and those decrying nationalisation.

While not officially backing today’s calls, Labour and trade union figures are believed to find the shift in tone helpful…