Without vision and values in the Remain camp, we're lost. 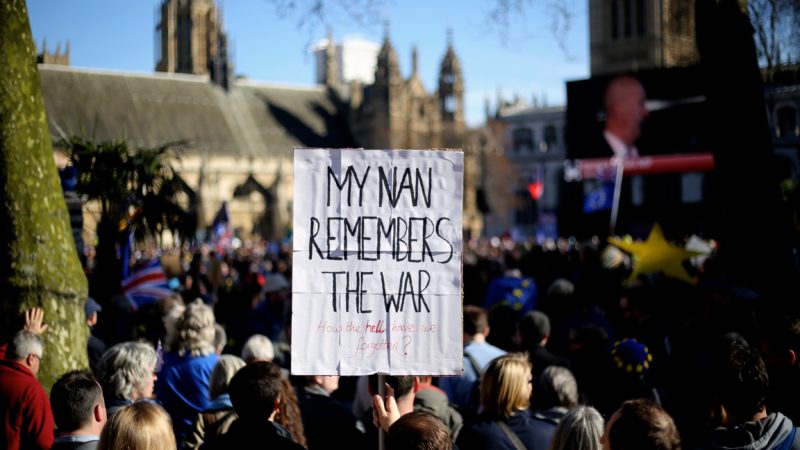 Living in Belfast, some of my friends there were blaming ‘racist’, ‘selfish’ or ‘ignorant’ working class communities in England for the vote.

Others focused their ire on the lies and misleading arguments of the Leave campaign. Some just seemed hopelessly confused and upset. Only a few articulated a clear understanding of what had happened (as much as one could gather at that point) and, crucially, what needed to come next.

Unfortunately, the Remain campaign seems to have learnt little in nearly two years since. Almost all energy and creativity in these camps is focused on retaining this or that part of the EU, or, too often through a legal or elite-driven fudge, keeping us in entirely.

This offers those that voted Leave very little reason to change their mind, or to see themselves and their concerns reflected in the campaign.

There seems to be a remarkable failure to grasp the fact that Remain (or Remain-lite) would merely bring us back to square one: a state where people were unhappy and pessimistic, labouring under a sluggish economy and a deeply unequal society.

The EU question, whether we Leave or Remain, cannot answer these questions on its own, but the part it plays in inequality and political disillusionment must be appreciated by those of us that ultimately believe in its potential.

Key to this is control. It’s easy to groan when we hear cries for sovereignty or ‘taking back control’, but these clichés tap into real problems- the sense of powerlessness so many feel over their own lives and the direction of the country.

Retaining full membership ties us into distant, opaque and elite-driven processes that landed us here in the first place. A principled, progressive Remain campaign that wants to win hearts and minds needs to engage with these issues.

We simply must avoid the dangerous notion that things were great before June 23rd 2016, because they weren’t. Remain, on its own, isn’t enough.

We need a European vision that seeks to rejoin the EU – leaving the ultimate decision in the hands of the people – but which also calls for systemic reform, democratising its processes, challenging ‘Fortress Europe’ mentality and decisively breaking with neoliberal policy.

More than just breaking with the bad, we need to offer an ambitious, positive agenda too – radical, coordinated international action on climate change and curbing the might of finance and big capital taking centre stage. Alongside the party’s emerging vision domestically, Labour needs to drive this forward – the impetus won’t come from anywhere else.

Until Remainers grasp this point, we’ll simply be throwing economic forecasts at a brick wall as the Conservatives dismantle all we hold dear – or at best swing enough people to ram us back into an uneasy, unsustainable relationship with the EU.

“Remain but” means people don’t have to go back on their vote. It means a change in the political debate that recognises and validates their legitimate concerns. It means giving purpose to the last, excruciating two years of British politics.

The point isn’t to lay out detailed reform proposals in one piece, but to convince fellow Remainers that unless we start thinking and debating what these proposals should be, our movement is morally and electorally vacuous.

We need to Remain, but not in the EU that exists now. Until we offer a way to tackle the flaws in the EU, who can blame Leavers for sticking with their vote?