Jacob Rees-Mogg had previously cited the article claiming it showed the "huge savings for us all outside the customs union". 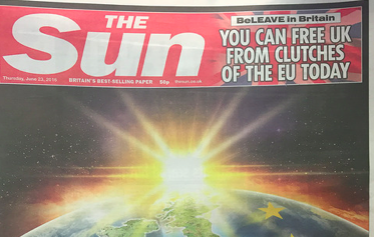 The Sun said that they’d made an “honest mistake” in an article that listed potential savings British shoppers would see on goods once European Union tariffs are removed after Brexit.

The article titled ‘vote for bargains’ claimed that “High Street prices are set to tumble after Brexit…”, but now the Sun has admitted it made the calculations wrong, having applied tariff costs to retail prices not import prices.

The original headline of the online article read: “Here’s some of the high street savings we can make after Brexit if Jeremy Corbyn doesn’t become PM.” 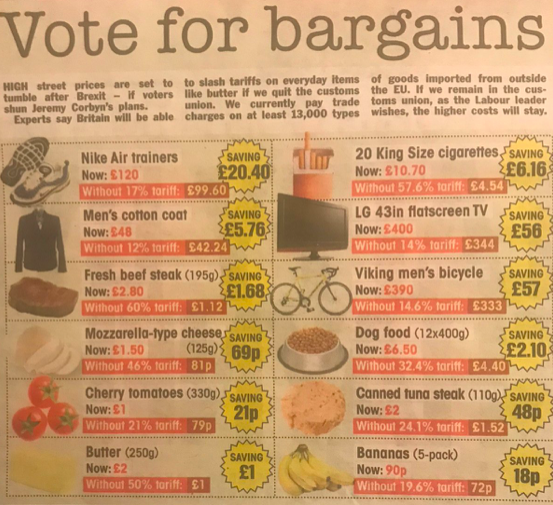 The article, which was removed within a day of publication, received support from hard Brexiteers such as Jacob Rees-Mogg who tweeted:

The Sun’s retraction and clarification this morning explained the various mistakes it made in the calculations, saying:

“For example, we said that savings on Nike Air Trainers would be £20.40, but savings would actually be closer to £7.50. There were also mistakes in the calculations for individual items.”

“For example, saving on a £2 pack of butter was given as £1, but the tariff is about 42p per pack… Savings on an LG flatscreen TV was given as £44, but there’s an EU free trade agreement with South Korea, so there is no tariff.”

“Leaving the Customs Union would not necessarily directly result in any savings on cigarettes and not £4.54 as stated.

“Savings on cherry tomatoes was given as 21p, but almost all EU imports of tomatoes come from Morocco, which has a preferential arrangement with the EU…

“The article also stated that we [currently] pay trade charges on more than 13,000 items from outside the EU… In fact, for many of these goods, no tariffs or charges are payable.”

Will we be seeing a retraction from Jacob Rees-Mogg – who hasn’t deleted the tweet – anytime soon?