Workers at a recycling plant kicked off a wildcat strike after management refuses to replace breathing masks' filters. 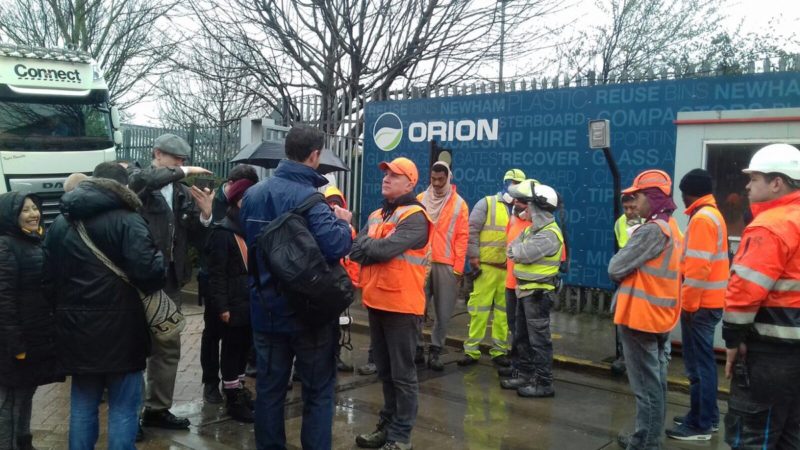 Workers at East London recycling plant Orion walked out on Wednesday after repeated complains about clogged up face mask filters were ignored by management.

The workers, who are all members of the United Voices of the World (UVW) union, are protesting what they describe as “inhumane working conditions” and “arrogant and callous” behaviour by their bosses.

Filters in the workers’ breathing masks is meant to be changed on a weekly basis, but management has ceased to replace them even monthly. The masks’ filters protect users from inhaling dust and fumes prevalent at the recycling plant. The workers, many of which are Latin American migrants, argue their health is in imminent danger.

One of the day’s slogans was:

Further complaints on their work uniforms include the lack of adequate earmuffs, work gloves so worn out the workers often suffer cuts and sores, and poor quality googles. Orion workers are also not entitled to showers and the toilets on the premises were said to be rat-infested.

After their 10am walkout, it was reported that picket line negotiations had also started taking place over sick pay and a raise in their £7.50 an hour salary (to a London living wage of £10.20 an hour).

The walkout was held under illegal circumstances but the union said it was now balloting workers for an imminent and indefinite strike.

A video of the plant workers’ working conditions can be seen here:

URGENT: Solidarity needed! UVW members working in a recycling plant in East London run by @OrionWaste will be walking off the job in protest this morning at their inhumane working conditions which puts their health in imminent danger https://t.co/zccZLD7n7B pic.twitter.com/2CndvlTLiB