Emissions from transport are continuing to increase – in contrast, the energy sector has cut emissions by 57%. 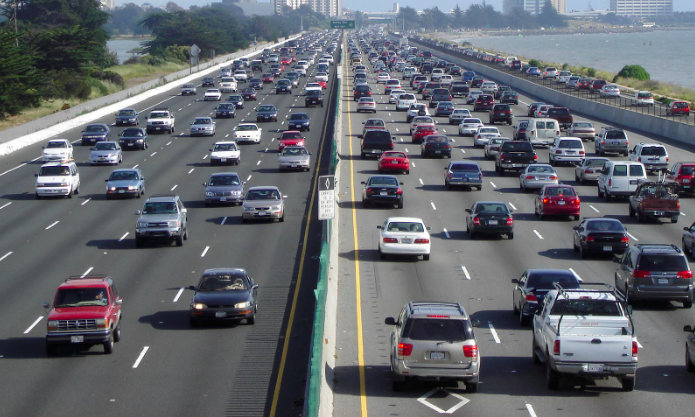 The Government has confirmed that transport in the UK is now the single largest emitter of greenhouse gases. Not only that, emissions from transport are continuing to increase. Between 2015 and 2016, the latest data available, transport emissions rose 2%.

Since 1990, transport emissions have dropped just 2% in total. In contrast, the energy sector has cut emissions by 57%.

In 2014, the Intergovernmental Panel on Climate Change (IPCC) was clear that ‘aggressive’ and ‘sustained’ efforts were needed on transport emissions to prevent climate change. Action in the UK has been neither ‘aggressive’ nor ‘sustained’.

The transport sector’s unchecked greenhouse gas emissions will ensure the UK fails to meet its legally-binding climate targets. At the same time, the toxic fumes pumped out by road vehicles are linked to the needless deaths of more than 900 people in Britain every week.

The disregard for the UK’s legal and moral duty to protect its citizens from the twin air quality and climate breakdown crises is scandalous.

With that in mind, I have written to Chris Grayling, the Transport Secretary urging him to avert crisis by changing course from a UK infrastructure agenda so dangerously rooted in the twentieth century.

With each year, each round of cuts, and each new investment in a ‘car as king’ fossil-fuelled transport system, the Government reverses from the sustainable transport future we need to build in Britain.

Committed to a major road-building scheme, the likes of which has not been seen for decades, the Conservatives are looking backwards in the hopes of building Britain out of a problem that requires bold political will and genuine innovation.

The Government isn’t confident it can even deliver the expensive projects to which it has already committed. If it does, however, we can be confident they will fail on their own terms — putting more cars on our roads and increasing congestion.

Dumbfounding as it is, at the same time, the Government is also cutting funding for bus services, rowing back on its rail electrification promises and under-committing to vital walking and cycling infrastructure projects.

In my constituency, this is best highlighted by the confounding decision to downgrade plans for a vital regional East-West railway link – choosing dirty diesel over electric trains – to prioritise building a new road system to connect the same cities.

The modest investment in electric vehicle technology, however, is welcome, and will play a part in detoxifying and decarbonising our transport system, but it fails to grasp the actual problem. As does a useless plan to ban polluting petrol and diesel vehicles in 22 years time.

We need fewer not just newer cars on our roads. We also need to be sure we’re not entrusting a car manufacturing industry found to be consistently dodging and cheating on vehicle standards with delivering the climate and environment innovations about which it has deceived the British public for nigh on two decades.

As a member of the European Parliament’s Public Health and Transport Committees, I am currently working on legislation that aims to introduce, as one measure among many, road pricing to ensure the negative impacts of driving are shouldered by the polluters and that the money is reinvested in cleaning up our air and decarbonising transport systems across Europe.

It won’t be popular among drivers, but when, as in Oxford, it is the people who least contribute to the problem that suffer its effects most strongly it is necessary and just.

Road pricing is just one of the measures already available to a UK Government that could take immediate action on the transport crises. Banning polluting vehicles from urban areas, diesel scrappage schemes, and charging clean air zones are some others.

Ultimately, we need to be moving away from private cars, towards more public and mass transport. We need a Government that supports local authority efforts to promote walking and cycling and provides the cost-effective infrastructure active transport requires.

It requires a bold vision to change the way we think about end-to-end journeys and deliver a system that is fit for purpose. It is what I am working on with my colleagues in the EU.

We’re not there yet, but I am urging Chris Grayling to join us on the road towards a truly sustainable mobility future.