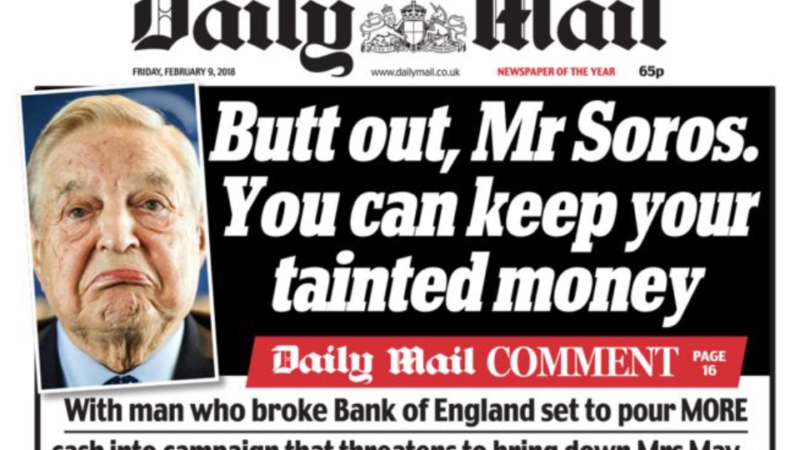 The Daily Mail are in a rage today. A real, frothing, front-page rage, fuelled by what you can only presume is insecurity. And we know why.

The row is over news that wealthy philanthropist George Soros has donated to Best for Britain, the campaign group pushing to give voters another say on Brexit.

The front page screams for the ‘American financier’ to ‘BUTT OUT’. Which would be almost principled – were it not for the Daily Mail‘s own status…

The proprietor of the most influential newspaper in Britain – the driver behind many of the most heinous right-wing policies inflicted on us – is understood to be officially domiciled in…France.

As the International Business Times reports:

“Lord Rothermere, who inherited control of [the Daily Mail Group] via a Jersey Trust and an offshore entity registered in Bermuda, acquired France as his “domicile of birth” upon his birth as his father acquired a French “domicile of choice” by becoming a tax exile in Paris.”

So the newspaper group leading the charge for a brutal Brexit is registered abroad, and owned by a man who refuses to deny he is based in France. The phrase ‘butt out’ comes to mind…

But wait – the hypocrisy doesn’t end there.

The Mail’s anti-EU rants are steered by editor Paul Dacre. In 2016 it was revealed that between 2011 and then he raked in nearly £500,000 in EU subsidies for his land.

And it would be easier to swallow the Mail’s rage if its parent group weren’t ‘estimated to [have] achieved ‘tax efficiencies’ of £139m over just one five year period’ through international registrations. Talk about foreign influence…

The response from Best for Britain to all this hypocrisy has been fairly original: they’ve launched a crowdfunder to back ‘Your Right to Fight’ to stay in the EU.

“This is just nasty politics from a die-hard Brexiteer fringe who still think the Tories need to be the nasty party.  Over the last couple of days they seem to have debased themselves with dirty dog-whistle politics.

“These intimidation tactics put people off public debate and stop people speaking out, but Brexiters should know one simple thing – they will not silence us. It is our democratic right to fight Brexit, and we invite all those that want to do the same to join us.”

If the Daily Mail want foreign individuals to stay out of our politics, they should look closer to home…

You can donate to the crowdfunder here.