Taxpayers are giving Branson and co a free ride to the bank. 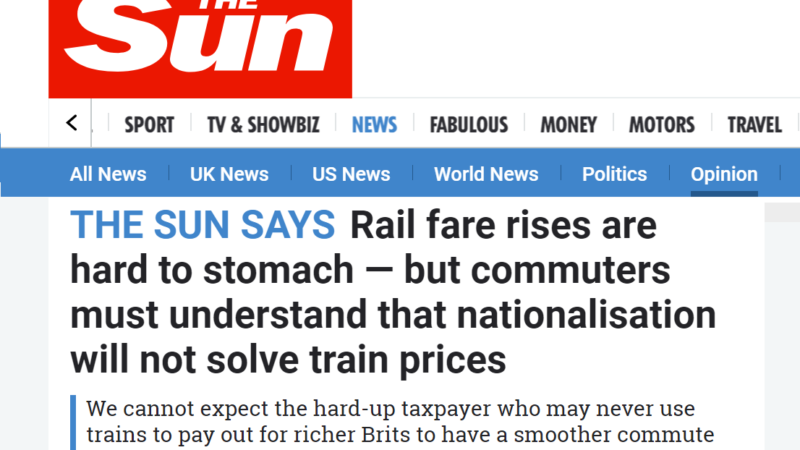 Right-wing papers were in full-blown attack mode this morning as talk of renationalising the railways geared up a notch.

The 3.4% rise in rail fares this week which came into effect this week has been described as ‘the last straw for passengers’ by campaign groups.

Organisations like We Own It and transport unions are calling for the government to ‘take back control’ of the broken rail network – particularly in light of 76% of the public believing railways should be run in public ownership.

Today The Sun’s editorial leads with faux sympathy for hard-hit commuters – before arguing:

“Renationalisation would mean hard-up taxpayers who may never use trains subsidising richer ones who would like a cheaper commute into London from their leafy suburb.”

Firstly, train subsidies have gone up since privatisation.

What The Sun describes is already happening under a supposedly ‘privatised’ system. As so often happens, the government is privatising the profits and nationalising the losses. As described here:

“The root cause of this imbalance is the huge subsidy provided for rail travel in London and the south-east.”

Secondly, rail is already nationalised in the UK – just not by us.

New analysis by the Telegraph has shown that “72% of rail franchises are already backed by the state – just not ours.”

They note that 18 out of 25 rail franchises are currently run by foreign state-backed operators, with the number set to rise.

Finally, the most recent example of publicly-owned rail in the UK – the East Coast mainline (before re-priviatisation a few years ago) was incredibly profitable for the taxpayer.

In the year to March 2014 – the last financial year before it was re-privatised – East Coast paid back £225m to the government.

We Own It, the campaign group calling for public ownership, has put forward five steps to take the railway into public hands. We publish it in full here:

Legislation currently bans any UK government bodies from running rail franchises, except as ‘operator of last resort’. This needs to be changed so that public bodies are allowed to take over rail franchises when they expire.

Directly Operated Railways (DOR) was the public body which ran the East Coast line as ‘operator of last resort’ between 2009 and 2015 when the private company failed. Under public ownership, East Coast was the most efficient franchise in the UK.

Despite this, in 2015 the government disbanded DOR and outsourced its functions to a partnership of private companies including EY. It needs to be reinstated as a public operator.

3. Bring rail franchises in house as they expire

Once the legal and practical sides have been dealt with, the public sector will be able to take over contracts as franchises come to their natural end. This approach will take longer than buying back rail franchises immediately but it won’t cost the government a penny.

At the moment rail companies spend 11% of their income from passengers on leasing trains from a small group of rolling stock companies (ROSCOs). If trains were bought straight from the manufacturers, cutting out the profit-hungry middle men, we’d save about £200 million a year.

Once all the franchises and trains have been integrated into one railway network, we will save around £1.2 billion a year. This money could be reinvested into better services or cutting fares by 18%.

We Own It has recently launched a campaign for the East Coast line to be brought into public ownership because Virgin and Stagecoach have failed to stick to their franchise agreement.

Despite the best arguments of The Sun and others, we know all this can be done. And not only that – it will actually be better for the taxpayer.

See also: Why we need to nationalise the railways

4 Responses to “The Sun is wrong: Taking back control of our rail network would save us a fortune”