Dark antidemocratic forces, we thought we'd banished to history, seemed to reappear in 2017. It's up to all of us to stop their rise. 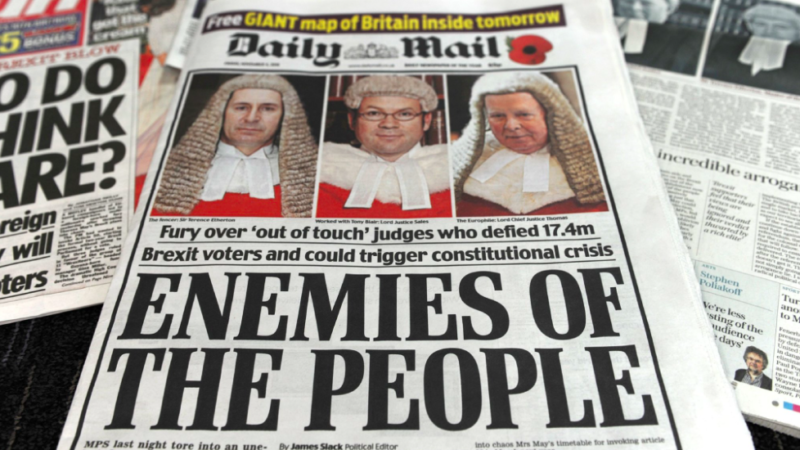 Although for many politically active people 2016 was a dark year, for me 2017 was the year that made me fear for the stability of our political system.

I moved from distress about Brexit and concern for the inadequacies of our electoral system to a conviction that we are actually in a battle for the very soul of democracy, both nationally and globally.

Brexit has unleashed tyrannical behaviour that we thought was committed to history.

Leading the charge for intimidation has been the Daily Mail, first undermining the independence of the judiciary with its attacks on the Supreme Court judges who determined that Parliament had to vote for the triggering of Article 50; later vilifying Conservative MPs who dared to vote against an ideological hard Brexit and deliberately inciting violence against them.

The parallels with activities of the same paper in the 1930s and the echoes of fascist propaganda have unsettled many in political life and more widely.

The techniques used by tabloid newspapers and by ersatz fascists on Twitter are not intended to make positive proposals for change. They merely destabilise confidence in democracy as a system that meets people’s needs, as well as their shared sense of reality.

This is why Hannah Arendt, German Jewish philosophy and anatomist of Nazism wrote that:

These developments are disturbing but we need to respond with courage, not fear, and we need to begin by recognising that democracy is not inevitable and needs our active support.

In the UK democracy has a history of about 200 years, and only 100 years for women. In many parts of the world its history is rockier and shorter, but everywhere we should recall how much we have to lose and not take our democratic rights and human rights for granted.

We can recall the strength and courage of those who fought for the empowerment of working people, like Tom Paine with his timeless slogan ‘eternal vigilance is the price of freedom’.

We need to make 2018 the year that we revitalise our democracy.

There are already signs of hope. When my colleague Jean Lambert stressed the importance of having a written constitution during a rally in London, she was greeted with enthusiastic cheers!

Meanwhile Green peer Jenny Jones is making progress with her proposal for a fully democratic House of Lords.

And most importantly, the campaign for a fair voting system, where every vote counts and votes are translated fairly into seats, is gaining momentum, thanks particularly to the extraordinary energy of the Make Votes Matter campaign and the excellent work of the Electoral Reform Society.

I send all these campaigns a fair wind for greater success in 2018.

So what can you do? Well, supporting any or all of those campaigns is a good start, but permit me to suggest a few other new year’s resolutions.

Join, support and nurture a society or organisation. I’m not suggesting joining a political party – although you might consider that – but that civil society organisations are the glue that holds a democratic society together, as well as the places where we practice the skills of democratic action.

This was the reason why the totalitarian regimes in Eastern Europe always persecuted or co-opted such organisations.

Be yourself and don’t be afraid to stand out from the crowd. I was recently in Berlin and saw the famous photo of the huge crowd of workers enthusiastically giving the Nazi salute while the lone resistor, August Landmesser, resolutely folded his arms.

This was a risky gesture that led to reprisals from a tyrannical regime and our acts of resistance are likely to be smaller and less dramatic.

But holding your opinions, or even your style, in the workplace or social setting calmly but confidently gives other people permission to be different and it is this difference that enables democracy to flourish.

Democracy assumes that, as citizens, we are often in disagreement and seeks a deliberative and mutually acceptable route out of that conflict.

So the territory of reasoned and respectful dispute is vital to the survival of democracy. This is why the spread of echo chambers created by social media is so unhelpful.

As we risk falling into warring ideological camps, perhaps the best piece of advice for the new year comes from the short booklet of Quaker wisdom Advices and Queries: ‘Think it possible that you may be mistaken’.

Molly Scott Cato is Green MEP for the South West and Green Party speaker on Brexit. She tweets here.