Students at Sussex University are going on rent strike after their Vice Chancellor was given a £230k bonus. 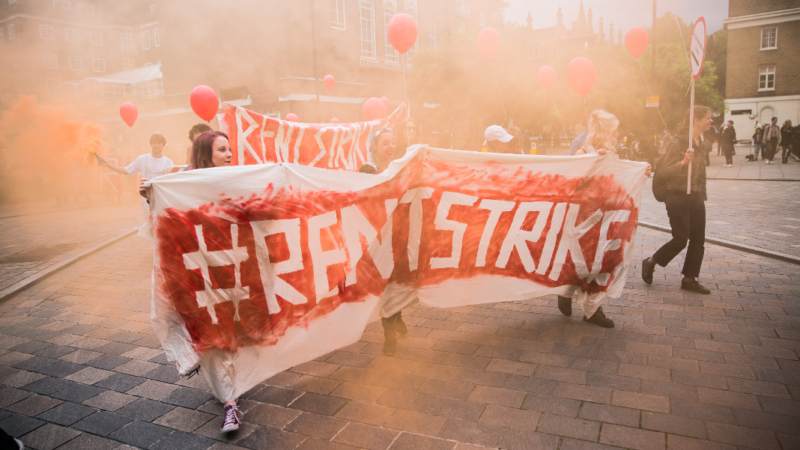 Students at Sussex University have announced they’re going on an indefinite rent strike — refusing to pay their rent to the university until their living conditions are improved.

The announcement comes just a day after it was revealed outgoing University of Sussex vice-chancellor was given a staggering £230k ‘golden handshake’ when he left the institution.

30 students living in a halls of residence on Kings Road in Brighton said this morning that they were taking part in the action because of “squalid housing conditions”, demanding the university improve things and offer compensation.

“If they can spare the hundreds of thousands of pounds for university bosses, they can spare at least as much to compensate students enduring squalid housing conditions.”

The protest at Sussex, which is being supported by tenants’ union ACORN, is just the most recent example of a wider rent strike movement that’s seen students win major concessions over the past year.

A rent strike at University College London (UCL) earlier this year, saw the university pay out £1.5m in compensation to striking students and commit to dropping rent in the future.

The situation at Sussex is similar to what UCL students went on rent strike over: dangerous and squalid conditions, lacking amenities and building works. The Sussex students said in a statement:

“The majority of flats in the Kings road block suffer from rodent infestations, many kitchen appliances, showers and toilets are non-functional, some flats have gone without hot water for weeks, and other basic services are in need of urgent repair.

The students in these halls, paying £502 a month, are demanding the university start immediate repair works and compensate them whilst construction is ongoing.

The rent strike follows revelations over the weekend that the outgoing vice chancellor of the university, Michael Farthing, was given £230k as a ‘golden handshake’ when he left the institution.

University leaders have come into the public spotlight recently as their pay and benefits have spiralled whilst student debt balloons and university teaching staff has flatlined.

Earlier last week it was revealed that the outgoing vice chancellor of Bath Spa, Christina Slade, was paid over £800k in her final year in office.

Whilst two weeks ago, the vice chancellor of nearby Bath university resigned after a public outcry over her £468k-a-year pay packet.

Universities are taking their students — and most of their staff — for a ride. If senior managers can award themselves massive pay packets and perks, they can afford to give students decent places to live.

One Response to “Is this the start of the next big student rent strike?”