Through passionate rhetoric addressing questions of identity and autonomy, the Leave campaign tapped into something the more cautious and technocratic Remain campaign failed to understand. 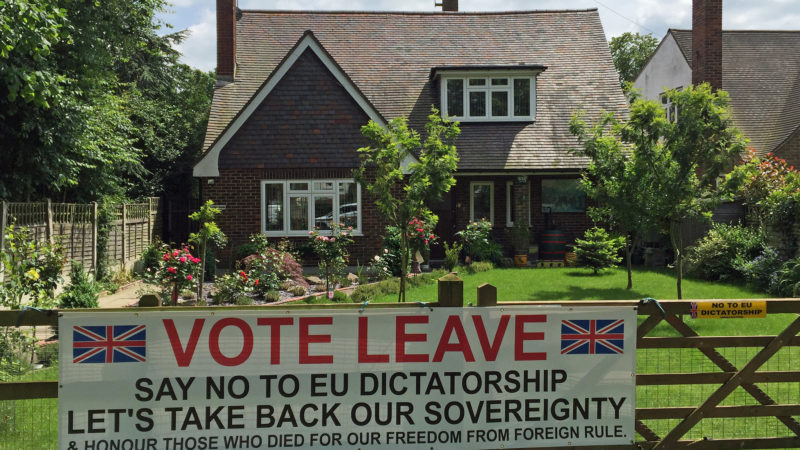 The referendum on Brexit was divisive in a way that went beyond simple disagreement between opposing camps; what was evident was a complete breakdown in communication between Leavers and Remainers.

This breakdown in communication was underpinned by the inability, for the most-part, of each side to comprehend the perspective of the other. With the referendum done and dusted, despite calls for the country to unite behind shared goals, this legacy of polarisation remains.

The breakdown in communication was represented in an article by Brendan O’Neill, entitled I’m a ‘Brexit Extremist’ and proud of it.

In the article, O’Neill refers to a YouGov poll finding that 39% of Leavers (800 from a 2000 person sample) say that loosing their or a family member’s job would be a price worth paying for Brexit.

Many Remainers jumped on this poll result as indicative of Leavers being either irrational or stupid, labelling them ‘Brexit Extremists’. O’Neill took the opposing view: that the poll represented something laudable – a willingness “to endure hardship in service of a moral cause”.

What was apparent in the article was not only disagreement, but two perspectives completely isolated from one another, making rational debate impossible.

For the majority of Remainers, whether or not we should leave the EU was underpinned by rational calculations regarding wealth and security. For Leavers, more emotional considerations, deeply connected to personal and national pride were paramount. From this perspective, self-sacrifice could be rationally justified in its satisfaction of a desire for honour.

In order to engage in constructive debate, it is not enough simply to argue from one’s own perspective; one must make an effort to understand the motivations inspiring the other side too.

The successful Vote Leave campaign recognised the desire for honour and self-esteem that many British people – especially in the so-called ‘left behind’ communities – felt they had been stripped of.

Through passionate rhetoric addressing questions of identity and autonomy on a personal and national level, the Leave campaign tapped into these motivations in a way that the more cautious and technocratic Remain campaign did not.

Given the Leave campaign’s success, the values and concepts underpinning the rhetoric are worth further consideration, as they will continue to be a source of motivation as Brexit unfolds.

Firstly, there was the campaign slogan – Vote Leave, take back control – which appealed to a desire to reclaim autonomy in decision making. Maintaining autonomy is essential to ideas of pride and honour which were a source of motivation, mobilising voters behind Brexit.

Similarly, references to Britain’s historic achievements mobilised voters by boosting their collective sense of honour. Through idealising Britain’s past and referencing great historical figures such as Shakespeare and Churchill, the protagonists of the Leave campaign encouraged voters to believe that something inherent in the national character would allow Britain to succeed on its own. What’s more, voters were instilled with a sense of duty to live up to former glories by showing leadership, rather than hanging on to the coat tails of others in Europe.

Finally there was the notion of Britain having a unique destiny, to be brought about through action in the present. This vision of the future is intimately tied to the romanticised notion of the past.

In the words of Boris Johnson, Brexit would allow us to “recapture our voice”. This sense of a unique British destiny was a source of pride and confidence for many Brexit voters and is rooted in the idea of ‘exceptionalism’, common to many past and present imperial powers. Though the British Empire may be gone, the sense of destiny and the imperative to show leadership remains.

Self-sacrifice in pursuit of an ideal was implicit in the rhetorical themes running through the Leave discourse in a way that was missing from the more cautious and pragmatic tone of the Remain campaign. By relying too heavily on economic rationalism and by showing reluctance to emphasise the values of collective responsibility, the Remain campaign failed to appeal to motivation based in honour.

Conversely, the narratives of the Leave campaign wove together notions of personal honour and national pride, forming a coherent system of values with which people identified and found inspiring. Within this system of values, taking risks in pursuit of greater autonomy and in order to chose a path free from European hegemony made sense.

For those who support intergovernmentalism, co-operation and integration, the task is to understand the importance of these motivations and to argue in a way that not only appeals to people’s pragmatism, but inspires them to take risks in defence of cosmopolitan values too.

Christopher Morton wrote his Masters dissertation on the discourse of the Leave campaign leading up to the referendum.

10 Responses to “Lessons from Brexit: The defence of globalism must appeal to more than mere pragmatism”