Why I'm backing direct action against this expensive attack on nature. 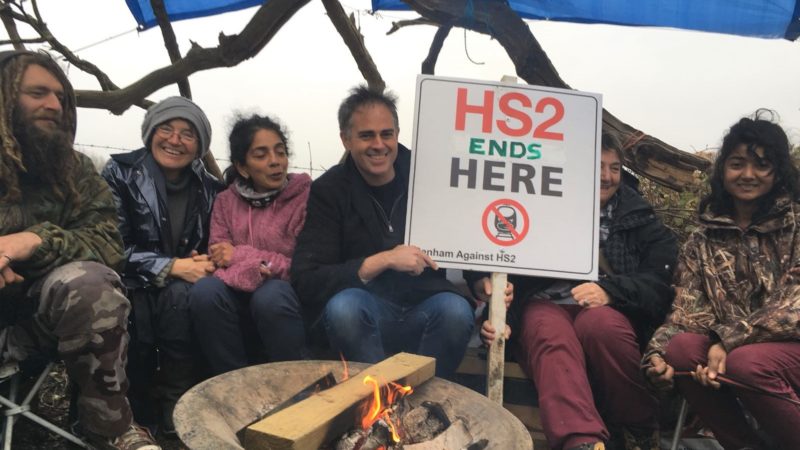 As the co-leader of the Green Party, I’ve seen some pointless environmental destruction in my time. But I’m starting to think that HS2 might be this government’s most outrageous attack on our natural world yet.

A high speed rail link might sound like a sensible enough idea – or a benign extravagance at worst. But the truth is that it’s environmental vandalism of the highest order, and it has to be stopped.

Earlier this week, I visited a group of residents in Hillingdon who have been camping on the side of a road for six weeks. They’ve pitched up a few metres from the construction of the white elephant HS2 project, as it prepares to trample and stomp its way out of north west London towards Birmingham, ripping apart everything on its path. And they aren’t moving until the project is cancelled.

Let down by their elected representatives, they’re taking nonviolent direct action – and I’m supporting them every step of the way.

The construction for HS2 threatens just under a hundred ancient woodlands across the country. The people of Hillingdon are determined to protect theirs, along with the waterways of the Colne Valley which provide over 20% of London’s drinking water, and the meadows which protect people’s homes from flooding.

This is our countryside, and the government is going to cover it in concrete. Nothing of this scale has ever been attempted before. Nobody fully understands the ramifications or possible consequences.

Beyond the impact on people, the trashing of ancient woodland is a crime against the natural world. The local woods are home to a huge range of irreplaceable species, ecosystems and habitats. From slow worms, to voles, to badgers, to bats, HS2 contractors routinely ignore evidence of the abundance of wildlife and plough on with the destruction.

With such brazen disregard for the local wildlife, activists believe that the construction is actually illegal – a clear breach of the EU habitats directive.

There’s also the small matter that this is all costing an eye watering £56 billion – equivalent to nearly half the entire NHS budget. But of course no one can put a price on the real cost of the environmental destruction.

As if this wasn’t enough, the Environmental Audit Committee has also confirmed that HS2 would be an environmental disaster. The committee has shown the biodiversity impact cannot be offset, and that HS2 will only keep its CO2 emissions down if it runs at the speed of a standard inter-city train.

Those are the cons. What are the pros? They’d better be pretty good. Well, we’ll be able to get from Birmingham to London a few minutes faster (a journey which currently only takes about an hour and a quarter). And that’s honestly about it.

It’s difficult to believe that this was ever given the go-ahead, let alone that we continue to throw cash at its spiralling costs. But still, the Tories, the Lib Dems, and Labour all trundle along with the plan, muttering about growth and progress – no matter the cost to the public purse and our natural world.

None of this is to say that our public transport isn’t in dire need of investment and vision. It’s just that HS2 has no place in any of that. Our political establishment has got itself so obsessed with flashy vanity projects like HS2, Hinkley and the Heathrow expansion, that it seems to have forgotten that spending smaller amounts of money locally and effectively would improve the lives of a far greater number of people in far greater ways.

Let’s take just one example. In my community of Streatham, residents are trying to get our local station disabled access. Having already found £50,000 locally the community just needs an additional £50,000 from the government. But we’ve just found out that cuts mean that the work will be delayed for a further five years. At the risk of repeating myself, I remind you that HS2 is costing the public an incredible £56 billion.

With that, we could improve existing lines. We could build more rolling stock. We could – if you can imagine such a thing – actually make it possible to get from the West of the country to the East, rather than just funnelling everyone into London. We could give Britain a public transport revolution, instead of wrecking swathes of our countryside forever.

Camped in the heart of Hillingdon woodlands, Green Party activists and local residents are leading the resistance against the destruction, helping us to imagine a different future for transport and conservation. HS2 contractors are making life as difficult as possible, needlessly fencing off a lane of the neighbouring road so that lorries speed past the camp with inches to spare.

But campaigners are not deterred. They sleep under the diggers. They mount the equipment. They stride into fields earmarked for construction, and refuse to leave until they’re dragged away.

We’ve a proud tradition of nonviolent direct action in the Green movement, and this is an inspiring new chapter in its history. Together, we might just stop HS2 in its tracks.

7 Responses to “Jonathan Bartley: HS2 is an environmental disaster – we have to stop it in its tracks”