Jonathan Bartley, co-leader of the Green Party, was dragged away by police on Friday whilst attending a non-violent protest in North Yorkshire. Here's what happened. 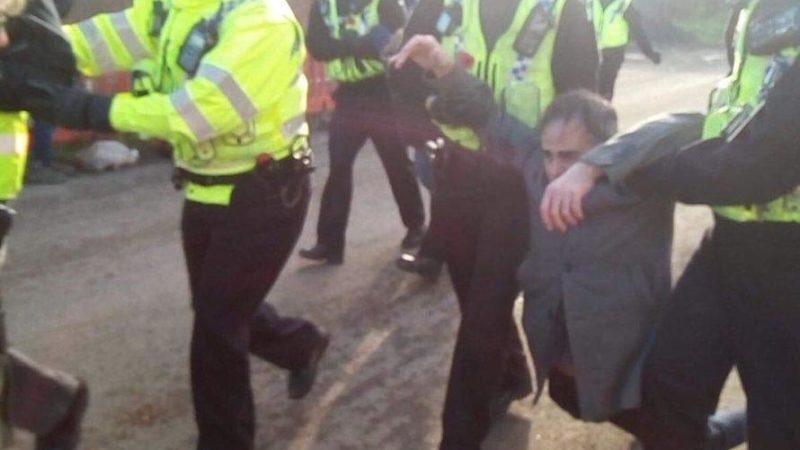 I had a slightly unconventional start to the weekend last week Friday – being dragged off by police for attending a non-violent protest in north Yorkshire. And it’s not an isolated case amongst anti-fracking protesters.

At the time, I was at the Kirby Misperton fracking site in Ryedale, drinking a cup of tea and giving a speech to protestors about why we can’t drill for gas and meet our climate targets when it happened.

Before I realised what was happening I was in the middle of a group of protestors being kettled. As police shoved us along a number of us fell over, my tea was all over the floor, and I was dragged by my arms as officers removed me from the entrance to the site.

I’ve been reflecting on it since. The protest had been peaceful and non-violent – and campaigners stayed that way as they were removed one by one.

The sad thing is that peaceful non-violent action is the only means of protest the community and campaigners in Ryedale have left. They said they don’t want fracking to take place – but they have been ignored.

Fracking is dirty, dangerous and unnecessary. Drilling for gas will wreck the climate commitments the Government made to the world under the Paris Agreement, and will leave us dependent on fossil fuels for years to come.

If the Government is serious about honouring the Paris Agreement it can’t continue its desperate dash for gas no matter the cost to our water, our air and our climate.

Those who put their bodies on the line to speak this truth about fracking are not alone – public support for fracking is in freefall, hitting just 13 per cent over the summer.

At the same time, renewables have never been more affordable as they make record after record with the price of wind energy also hitting an all-time low this year. Not only do the community in Yorkshire not want fracking – they know we don’t need it.

But instead of listening to the community in Ryedale, to the evidence or to the public the Government has sided with the fracking companies set to profit from churning up our countryside.

In Ryedale drilling is set to start any day now – all that remains is for secretary of state Greg Clarke to give the final go ahead. The situation is desperate, and the scale of public resistance is a reflection of that.

On visits to Kirby Misperton and other fracking sites across the country I have met dedicated countless dedicated Green groups putting their bodies on the line in a last bid to protect their communities, their water, their climate and their local democracy.

But I’ve also been heartened to meet more local residents than I can count, many who have never been on a protest before but who will not stand by and watch the natural world they love be torn apart.

It is always an honour to stand beside these local heroes. Until last week I had heard of the police force they have experienced at protests in Yorkshire and Lancashire – but it was another thing to be on the receiving end myself.

It made me all the more proud of the green movement who face it day in day out as they stand up against the destructive practice of fracking in their communities. And it has made me more determined than ever that we will not give up this fight until we win.

Jonathan Bartley is co-leader of the Green Party. He tweets here.

4 Responses to “I saw police aggression at fracking protests first hand. These tactics won’t silence us though”