Schools have faced a £2.8bn real terms cut to budgets since 2008 and our educational institutions are close to breaking point. 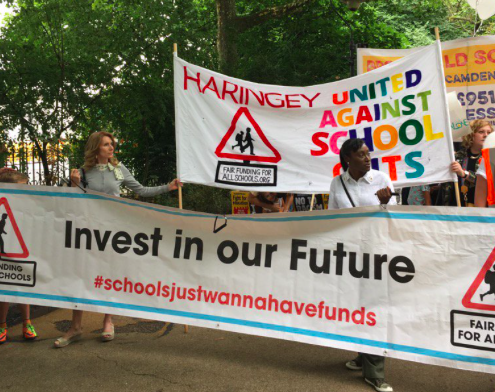 “At the end of last year, I had to let the caretaker go. Now I do his job as well as my own. I came in over the summer holidays to paint the classrooms myself”.

This is a quote from a headteacher of a primary school in Cumbria in 2017. Those MPs who prefer to hide behind spin-heavy Ministerial statements would do well to get out to more schools and find out just how wrong the situation has become for schools up and down the country.

Last year we set up the Fair Funding for All Schools campaign, a network of parents across England who wanted to join forces to let the government know that we were no longer prepared to accept cuts to our children’s education.

No parent wants to see their kids educated on the cheap. And no politician has ever been elected on that basis.

Which is why our campaigning, along with others from teaching unions to council leaders, has had such a powerful impact.

The polling company Survation estimates that 750k people changed their votes in the last general election on the basis of the school funding issue.

Conservative MPs licking their wounds in the aftermath flagged up school cuts as a major doorstep issue – one that they just didn’t have an answer to.

In July, the Secretary of State for Education, Justine Greening accepted the argument was lost – schools needed more money, she agreed.

She raided her department’s funds to find £1.3bn more from other projects to find more money for core school budgets over the next two years.

This moderates some of the cuts going forward. She can now say that, under the new National Funding Formula, all schools will see some sort of cash increase – until 2020 at least, beyond that, who knows?

And it is not enough to ensure that the National Funding Formula does what it sets out to do which is to provide a fair system for all schools. Under-funded areas still lag far behind.

This is why, even with the new injection of funding, 88 per cent of schools are facing real terms cuts to their funding over the spending review period of 2015 – 2020.

To be fair to Greening, she’s done what she can. She was brave enough to admit that what we were saying all along was, in fact, the truth.

She has ruthlessly cut from her own department in order to put more money into core school budgets – a false economy in the long term though that may be.

But the government are not backing her – they are coming up short. If they are to deliver on their promises to protect per pupil funding for all schools while implementing a fully funded new National Funding Formula, then we simply need more money.

The pressure is now on the Chancellor to use the budget this November to deliver a better future for schools.

That is why over a thousand parents from across England, from Devon, Birmingham, Wokingham, West Sussex, Bristol, Cumbria, London and all routes between, will be descending on Parliament on Tuesday 24 October to lobby their MPs.

We have a simple ask – listen to us, listen to our teachers and our school leaders. Tell the Chancellor to come up with the funding we need. Give our schools the security they need to plan and invest over the next five years. Give fair funding to all our schools.

I want to live in a country that offers hope to our kids. Is this really the best we can do? We urge you to join us, meet your MP (or write) and come to the rally.

Jo Yurky is a founding member of Fair Funding for All Schools. Follow their campaign here.