With racial profiling now part of the NHS, here's why doctors are taking to the streets against the Tories' 'hostile environment' policies. 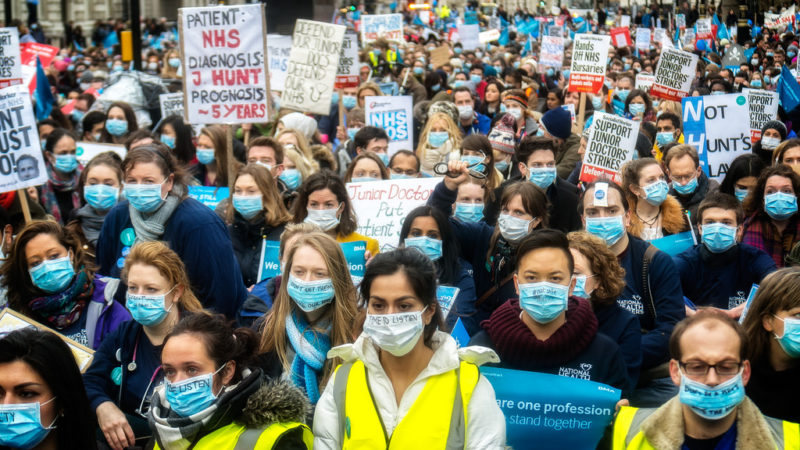 Last weekend, thousands of NHS workers and activists marched in London, Newcastle and Manchester to protest against something which has dropped off the radar – a health policy which has left migrants too scared to access care.

We are from all parts of the NHS, but are united against the government’s ‘hostile environment’ policy, which has been described as discriminatory and inhumane.

So what is it? The ‘hostile environment’ policies were initially introduced by Theresa May’s Home Office in 2014. These included ID checks when assessing hospital care, charging migrants 150% the cost of the service, and the sharing of the patients’ details and addresses with the home office.

Doctors of the World UK has a clinic in East London which provides support to those excluded from healthcare. The majority of users are destitute and many are victims of abuse, violence or human trafficking. They are too afraid to seek medical help, fearing arrest by the home office, detention or deportation.

Since 2014, the government has covertly introduced further policies that compromise the integrity and principles of the NHS.

In January this year, it was revealed by BuzzFeed that the Home Office is using private NHS data to find and track migrants. GPs were not aware that this was occurring.

As this data sharing has become known, there has been outrage among health professionals. The BMA, the largest doctors union, has stated their strong opposition: breaching the sacred principle of assumed confidentiality undermines the trust that is vital to the doctor-patient relationship. There is also a considerable public health risk. When those on our streets are unable to access healthcare, we risk breakouts in communicable diseases such as TB and hepatitis.

What this will do is deter the most vulnerable and marginalised from assessing care, with potentially fatal consequences. Lucy Jones from Doctors of the World told me it ‘seriously undermines’ the role these services play in ‘protecting public health and safeguarding children and vulnerable adults’.

Charities will also be implicated in this, including Marie Stopes, which provides free sexual health and abortion services. This is concerning. As explained by Dr. Jones, many of the women are sex workers or victims of trafficking, with limited access to contraception:

“Timely and affordable access to abortion is essential for all women. Restricting access will simply increase illegal and unsafe abortions” – with potentially fatal consequences.

These changes are being introduced under what is known as a ‘negative procedure’. This means that these changes will not automatically be debated in the House. For a debate to occur, MPs need to ‘pray against’ the regulations – and ideally this needs to be tabled by the leader of the opposition for the best chance for the debate to occur.

The premise that these measures have been brought in for NHS finances is misguided. The figure of £500 million a year has been thrown around in the media as the cost of health tourism. Yet Hunt commissioned research from two firms to come up with this figure –  with the companies themselves admitting the research was ‘based on incomplete data…and a large number of assumptions’.

Actual ‘deliberate’ health tourism was estimated by Prederi to cost, at most, 0.1% of the NHS budget. But now overseas visitors’ teams have been set up to collect money and enforce these policies.

The initial evidence suggests they are not even recuperating enough money to cover their overheads – hardly surprising when you consider the group of people they are targeting.

The real aim of these policies is obvious – the clue is in the name, with the NHS is being used as part of Theresa May’s ‘hostility campaign’. The NHS should never be home to discrimination and racial profiling.

Access to healthcare is a human right. We have to question the humanity of our society when we restrict access to those that are most vulnerable and marginalised.

At the Labour party conference, Jeremy Corbyn repeatedly called for human rights to be at forefront of public policy. Human rights should be applied to everyone, not just for the ones with the correct ID papers.

Sonia Adesara is a sexual health doctor, and is Chair of both the Fabian Health Network and the Young Medical Women International Association. Follow her on Twitter.