Deliveroo are resisting better conditions on the grounds that it would push up prices. Customers should call their bluff and and be willing to cough up. 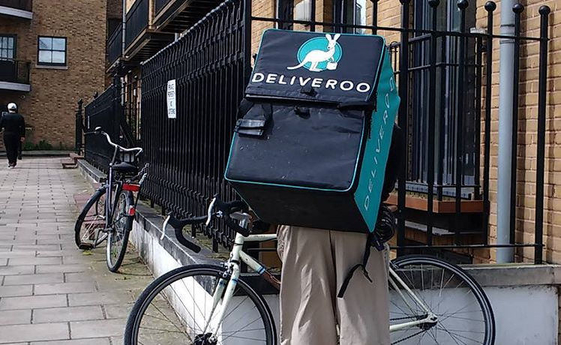 We heard a warning – or was it a threat – on Tuesday from Deliveroo’s Dan Warne. Sat in front of the House of Commons Business Select Committee, he opined that giving rights to the company’s “workers” would add a pound to the cost of each meal delivered.

The comment struck a discordant tone in resisting the push towards better conditions in the gig economy. Mr Warne was alongside his counterparts from Uber, whose Uber Eats is a rival to Deliveroo – and who are suitably contrite following the TFL decision to revoke its licence. And he was alongside Hermes, who have threatened hellfire on mangers who continue to fail basic tests of human decency.

Deliveroo was set up in 2013 as one of the new wave of net-based platforms that connect customers with service users. Typically the “last mile” – from food outlet to customer – is set up on a ‘no-employee’ basis to minimise costs to customers and profits to owners.

But precarious forms of employment have, rightly, been taking something of a bashing lately.  Unflattering Australian research showed how the Deliveroo employment model systematically depresses pay, and there was a 2016 strike by Deliveroo riders in London.

Late last year, the GMB won a landmark case against Uber to establish that though their drivers may not be employees, they are workers – a specific legal definition which gives a basic floor of rights.

Then Matthew Taylor delivered his report on Good Work. The virtues/shortcomings of his work have been widely discussed, but it is incontrovertible that the Deliveroo model is not one that garners many credits on the Taylor scale of decent or sensible corporate conduct.

Then last month, as if to prove the Uber ruling wasn’t a flash in the pan, Addison Lee were also on the wrong end of a judicial ruling. So it seems the argument about how to treat gig economy workers is becoming clearer.

But here are three reasons why Mr Warne’s “one pound” warning is misleading:

There is a serious and unavoidable challenge for all of us in making net-based business platforms work for everyone.  That’s why whatever the disappointment many have about his report, the debate Matthew Taylor is pursuing (most recently on Wednesday at a joint hearing of two Parliamentary Committees) is so important.

So too are things like the gig economy campaign platform Co-Worker.org in the US (and we do need to work out how to establish something similar here). Because, as the IWGB union and others have insisted, workers in the precarious economy cannot always wait for or rely on the efforts of others to have decent standards of work.

And there is surely a prize waiting for companies who manage to reconcile efficient, high quality service with proper working conditions. What they might lose in short-term maximum profit will be a gain in longer-term viability.

The train on appropriate regulation of this economic space has left the station and gathering speed.  Mr Warne and his colleagues either need to buy a ticket or get left behind.

And yes – we should be prepared to pay more for out take-aways so that Deliveroo riders can put food on their own tables.

One Response to “One pound extra for workers’ rights at Deliveroo? We should all be prepared to pay it”