I witnessed a 79-year-old woman being kettled by a dozen officers for making tea. Keith Taylor, Green MEP, reports from Kirby Misperton in Yorkshire. 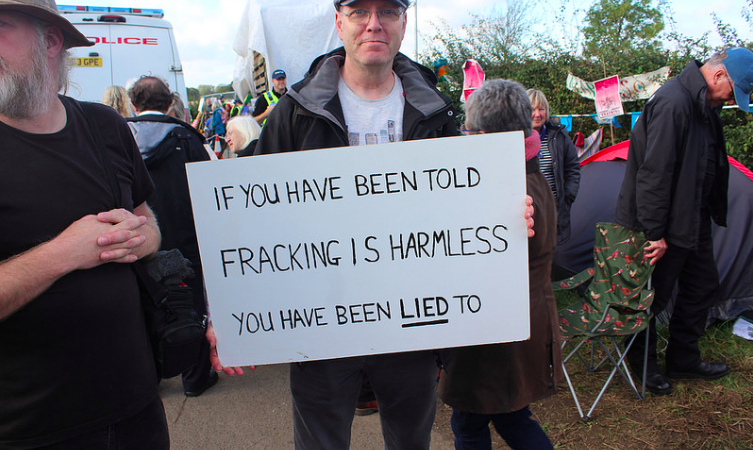 If there are two things I know about Yorkshire folk, it’s that they love tea and are very partial to the countryside idylls that abound in God’s Own County.

It was with the promise of soaring natural beauty and an abundance of cuppas, then, that I took a break from the Green Party conference in Harrogate, North Yorkshire to visit the tiny village of Kirby Misperton.

The village has the dubious dishonour of being the testing ground for new hydraulic fracturing in the UK. Despite overwhelming opposition, the local community are set to be guinea pigs for a dangerous process that our neighbours in Ireland and Scotland have already seen fit to ban.

The site has attracted both dedicated and tenacious protesters from the surrounding areas and a substantial police presence. Subsequently, concerns about ‘heavy-handed’ and ‘disproportionate’ policing on site have persisted.

Arriving at the site, the first thing that struck me was the sheer scale of the policing operation.

The number of boots on the ground appeared to be almost preposterously disproportionate to the ‘criminal threat’ posed by a group of resolutely peaceful local residents.

On greeting campaigners, I was informed officers had imposed an ‘informal’ injunction – translation: unenforceable in law – against passing any food or clothing to a campaigner who was camping atop the site’s so-called ‘watchtower’.

I decided to challenge the ‘injunction’ by taking a bag filled with supplies and tossing it up to a very grateful campaigner.

I was immediately approached by one of the numerous officers and questioned over my actions. I reckon I would have been arrested, had the campaigners not informed the officer I was a member of the European Parliament.

On what charges, I couldn’t be sure. But looking at the arrests-charges-convictions ratios at other drilling protests it seems officers rarely think that far ahead.

My brush with the law wasn’t the main ‘attraction’ during the visit, however. Instead, it was a seemingly innocent tea and cake stall that proved most contentious.

The stall is run by the very gentle and lovely Jackie Brookes who, at 79-years-old, has decided to express her opposition to fracking in her community in the most Yorkshire way possible – by keeping campaigners, and police officers alike, topped up with tea and cake.

However, on the day of my visit, officers had taken exception to the location of Jackie’s tea stall. And, regardless of the rights and wrongs of the case for moving the stall, what I witnessed next was beyond belief.

Jackie declined a police request to move her stall while she waited for advice on the legal argument for doing so.

Before she could get an answer, though, her stall was stormed by at least 15, by my count, officers who proceeded to kettle the 79-year-old – to a chorus of ‘shame on you’ from fellow campaigners.

The police response was a frighteningly incredible overreaction. It amounted to little more than the bullying and intimidation of visibly shaken grandmother whose only crime was being a ‘radical’ in charge of a teacake.

In the end, the bullying and intimidation worked; Jackie – the dangerous ‘teapot terrorist’ – was terrified into moving away from her stall before the police moved in to dismantle it.

The operation was shocking. To my mind, 15 officers intimidating a 79-year-old ‘tea lady’ is neither an example of fine policing nor a good use of police resources at a time when budgets are being cut across the country.

What I witnessed in Kirby Misperton was not a one-off. Footage from fracking and drilling protests in Derbyshire, Lancashire, and Sussex have shown the intimidation, excessive force, and even violence visited upon peaceful protesters by police and private security forces.

The most recent report from the Network for Police Monitoring revealed that political pressure is being brought to bear on police forces across the UK to act as the ‘legal enforcers’ in a fracking debate the Government is losing.

It is why I have twice, in just the last few months, called on the National Police Chiefs’ Council to urgently review the guidance it produces to constabularies about the policing of fracking and drilling protests.

Like Greens across the country, I know campaigners in North Yorkshire won’t give up the fight to protect their communities, their children’s futures and the beautiful countryside in God’s Own County.

And I have no doubt that once rested and recuperated, Jackie will be back to doing her bit to keep the campaigners going and the cuppas flowing.

Ultimately though, we cannot ignore the fact that the Government’s full-steam-ahead approach to fracking is threatening our fundamental freedom of protest in Britain.