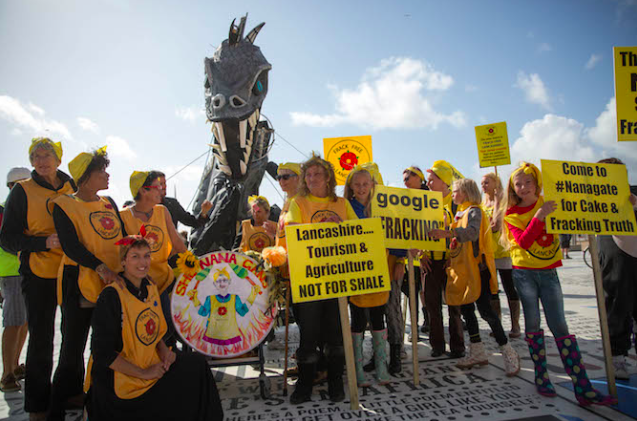 Cuadrilla hope that their fracking rig at Preston New Road is the first step on a path to a new dash for gas, but my visit to the site on Monday reinforced my belief that this blot on the landscape is just as likely to be the shale revolutions last hurrah.

Over 150 campaigners greeted Jonathan Bartley and I upon our arrival, and I was struck by the huge amount of enthusiasm and commitment from people who had travelled from near and far to make a stand against extreme energy.

The charge sheet against fracking is extensive and begins with the gravest and greatest threat of all: climate breakdown. People are experiencing the result of our fossil fuel addiction now.

And we know the truth. Burning fracked gas will lead to further climate devastation because it locks us into a fossil fuelled energy future.

Such an addiction to burning hydrocarbons makes hurricanes more powerful, it floods our towns and cities – it makes every challenge we face today more challenging tomorrow, and it will hurt those with the least the most.

Fracking is no path to a low carbon Britain – it’s another step off the climate cliff face.

Fracking also poses a number of local risks too. One local resident, Doreen Willey, knows this all too well.

Doreen told me of having her bed ‘move away from the wall’ and her cupboard ‘come off in the kitchen’ in the dead of night as drilling caused tremors measuring 2.3 and 1.5 on the richter scale back in 2011.

With fracking being linked to air and water pollution – and operations at these sites likely to clog up local roads too – it’s easy to see why people in the area are saying a loud ‘no’ to drilling in their community.

After I left the campaigners at the site gate on Monday something both strange and disturbing happened.

A Welsh police unit, drafted in to help the Lancashire Constabulary, despite the Government of their own nation maintaining a moratorium on drilling, swooped in to lift campaigners out of the way to allow vehicles to access the pad.

Puzzling enough as it is – since they were extremely passive when I (and a large amount of cameras) were there. But when you consider that these police are acting out the wishes of the London-based Tory Government who overturned the ruling of the local council and residents – things seem sinister.

As one local resident – an ex serviceman called Ian Blunt – said to me ‘What’s the point in us voting for councillors who say no if them up in London have the right to say yes’.

Maybe Sajid Javid could explain why Ian’s losing faith in democracy in the country he fought for?

Of course it doesn’t have to be like this. Just last week a huge reduction in the cost of offshore wind was announced – making clear that turbine farms off our coast can easily become the backbone of British energy.

The falling cost of renewables and fast pace of technological change mean we simply don’t need it either.

I’m proud to be co-leader of a party whose members peacefully put their bodies in the way of corporate-driven climate breakdown and I applaud those who are making a stand at Preston New Road.

Their fight is not easy, and the forces of conservatism and capital stand in their way. But, as sixty year old Doreen Willey said before I left the site on Monday, ‘this is for our grandchildren’.

The fracking firms should know that there are Doreens up and down this country who will stand up for their children, grandchildren and communities.

If Cuadrilla and other fracking firms they think it’s been difficult to ride over people’s legitimate concerns in Preston New Road then they should know that their troubles really are only just beginning.

Caroline Lucas is co-leader of the Green Party. She tweets here.