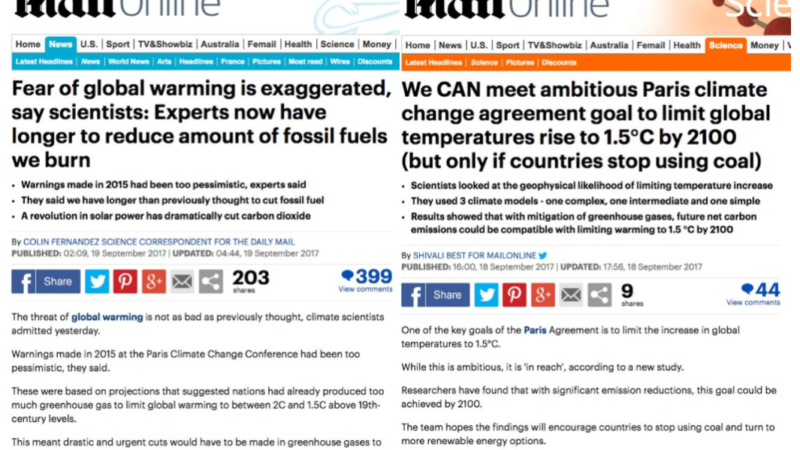 The first article, which appeared in the print copy of the newspaper and on the website, interprets the new report from researchers at Oxford as saying climate warnings are too ‘pessimistic’; it’s titled:

“Fear of global warming is exaggerated, say scientists: Experts now have longer to reduce amount of fossil fuels we burn”

The second article, relegated to a poky corner of the online science section, says the report shows climate change could be slowed if carbon emissions are radically cut; it’s titled:

“We CAN meet ambitious Paris climate change agreement goal to limit global temperatures rise to 1.5°C by 2100 (but only if countries stop using coal)”

The online-only article, which says ‘ambitious’ reductions in emissions could limit climate change, followed roughly the same line as the rest of the science press.

The highly respected US science magazine Nature, for example, said the report showed ‘heroic efforts to curb greenhouse-gas emissions will still be necessary to limit warming.’

‘The threat of global warming is not as bad as previously thought, climate scientists admitted yesterday’, says the print article, clearly going against the actual findings of the report.

It’s at least nice to see the Mail directly contradicting itself on an issue in the same day; this process normally happens over a series of a few weeks.