The Gard family are complaining to the press regulator IPSO over the newspaper's actions following their son's death. 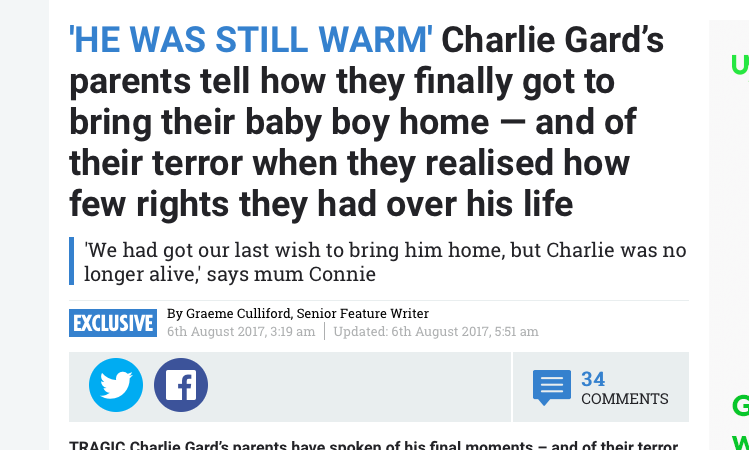 The parents of Charlie Gard have filed a complaint with the Independent Press Standards Organisation (IPSO) after the Sun lifted parts of their exclusive interview and family photos they shared with the Daily Mail following their son’s death.

The Sun, The Sun on Sunday and Sun Online brazenly lifted and rearranged in a “sensationalist” way large parts of interviews that appeared in the Mail without the parents’, journalist’s or newspaper’s permission.

Alison Smith-Squire, the journalist who did the interviews for the Mail said Charlie’s family were “shocked and horrified by the multiple insensitive, sensationalised stories The Sun, The Sun on Sunday and Sun Online spewed out over the weekend”.

“In addition the stories were rewritten regularly online with quotes taken out of context used as sensational and shocking headlines which were deeply upsetting and distressing to the Gard family.”

The Sun offered to pay the family for the story, but they had chosen to go with the Mail “because of the paper’s support for them during legal proceedings, in which they fought for Charlie’s right to access treatment in the US for his rare condition”, reports the Press Gazette.

The newspaper even had the gall to label many of the stories it had lifted from the Mail ‘exclusive’, despite having plagiarised them.

“The Gard’s only much-loved child has only just died. To treat grieving parents in such a cruel and thoughtless way out of sheer greed – to sell more newspapers and get more clicks – is reprehensible.”

Said the journalist on the story, Alison Smith-Squire.