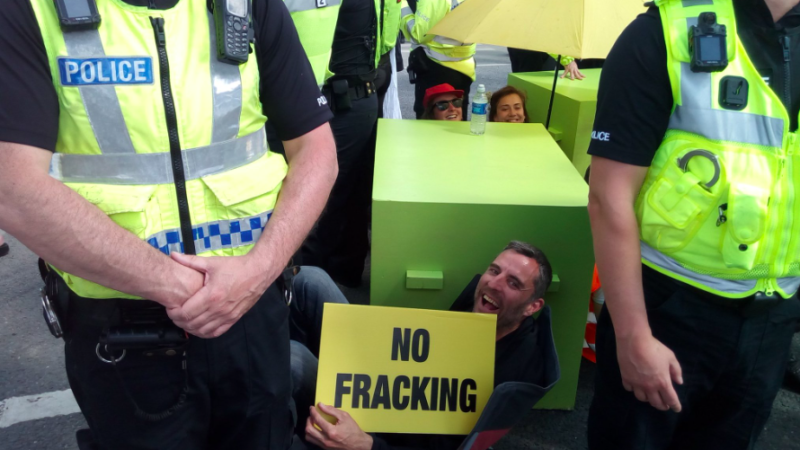 In August 2014 I joined Frack Free Lancashire, an local anti-fracking group, blocking a fracking site in Lancashire. I returned this year to find the movement larger, more vibrant and closer to victory than I ever could have imagined.

Three years ago, fracking company Cuadrilla were in the tentative stages of exploring for shale gas in the countryside just outside Blackpool. Centrica had just invested £160 million in Cuadrilla. The government had announced ‘generous new tax breaks’ for frackers. Fracking was on the rise.

We joined forces with the local residents’ group to show that their plans, although supported by industry and government, were not supported by the people.

We took direct action against at thirteen different locations associated with the fracking industry – from PR firms to exploration sites, highstreet banks invested in fracking to research units.

At the same time, more than 250 community groups sprung up resisting fracking exploration across the UK.

In Lancashire in June 2015, Lancashire County Council threw out Cuadrilla’s planning applications for the UK’s flagship fracking sites. The council was swayed by 11,000 written objections they’d received from local residents. Our campaign had won, but it was a short-lived victory.

In October 2016, Communities Secretary Sajid Javid overruled the local council and approved Cuadrilla’s plans. But Javid’s intervention only gave a last breath to a dying industry.

Major investors like Barclays have pulled out of the fracking industry. Potential sites in Surrey and Yorkshire are delayed as councils fear the disruption seen elsewhere.

Fracking is on its last legs. But as frackers fight for their survival, their desperation has become dangerous.

Fracking companies have increasingly turned to repression by courts, police and security to secure their return on investment. Cuadrilla’s injunction on their Blackpool site has now been one-upped by Ineos’s high court injunction.

Police forces have been drafted in from across the country to get lorries into Preston New Road. Violence by police and security has been widespread and well documented.

The future of the Cuadrilla itself all depends on whether its violent security operation successfully breaks through community opposition to get this well dug.

Lancashire is in open revolt against Cuadrilla. ‘Fracking’, a word once technical and alien is now known and reviled by all – just ask a taxi driver in Blackpool to take you ‘where the fracking is’.

The resistance is all day every day. The last month has seen Reclaim the Power contribute to a ‘rolling resistance’, blockading the site at Preston New Road every day with lock-ons, lock-ons and, well, more lock-ons.

Direct action to fracking was once carried out by seasoned activists backing up those living and campaigning using other tactics in their local area. Now, though through years of workshops and skillshares, direct action tactics are being taken on by everyone.

Those living next to the site, local councillors who rejected the planning application, even three generations of the same family.

A defeat for fracking in Lancashire would be a lethal blow for the industry in the UK as a whole. Join the fightback against fracking, support Frack Free Lancashire; together we can tell Cuadrilla to frack off once and for all.

Tim Young is an environmental activist and writer.