Don't believe the hype: figures showing a fall in inequality don't give the whole picture. 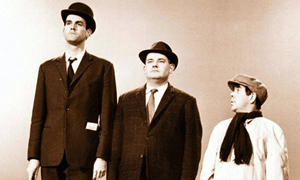 If you read the news this week, you’d think that Britain was becoming a haven of equality. Yet reports on Institute for Fiscal Studies figures showing a fall in income inequality give a rather selective view.

The bigger picture is this: overall income inequality rose in the 1980s and since then has failed to substantially reduce – while other inequalities are on the rise.

All you have to do is talk to people around the country and understand their experience of the economy to know that the headlines don’t tell the real story.

Here are five reasons why we should take this week’s figures with a pinch of salt.

1. The real story of inequality lies in the top 1%

While measures of overall inequality have remained broadly stable since the 1980s, they hide the extraordinary performance of the top 1% – rising steadily until the Great Recession. The data we have (which almost certainly underestimates high incomes) suggests the incomes of the top 1% have been rising since then and bounced back very quickly since the recession (see page 35 of this week’s IFS report).

The IFS report suggests that the earnings of the top 1% may have fallen since 2008, but this masks income from existing wealth, which plays an increasingly important role in our economy – particularly for the super rich.

These eye-watering top incomes distort our economy in a number of ways: they lead to massively inefficient use of land and housing (in the UK 1.4 million houses remain empty, while homelessness is on the rise), cause financial instability leading to the 2007 crash, and fuel unsustainable resource use through conspicuous consumption.

2. The ‘fall’ in income inequality only applies to some measures – and we are still doing worse than 50 years ago

The Gini coefficient, a measure of overall income inequality, rose substantially during the 1980s, and has gently fluctuated since then. The Gini peaked just before the financial crash, fell slightly in 2007–08 and 2011–12 and has remained largely unchanged since then.

So while the fall in this measure of overall inequality in the last ten years is real – due largely to high employment – it is small and so far does not mark a break from the pattern of high inequality of the past 50 years.

The UK remains one of the most unequal countries in the rich world – higher than Greece or Latvia. And, if we look at other measures of economic inequality, a very different story emerges.

3. Wealth inequality is as damaging as income inequality, and it’s on the rise

While income tells us important information about how money flows to different people in our economy year by year, wealth provides the security and investment opportunities on which many life decisions rely. As I’ve argued before, wealth inequality is just as important – if not more – for understanding the experience of inequality in the UK, particularly between generations.

Just like top incomes, information on wealth inequality is deeply opaque, but we do know that it is much higher than income inequality and the data we do have suggests that it is on the rise, particularly at the very top. The UK – a relatively small country in terms of population – is home to a worryingly high proportion of the world’s billionaires.

4. More jobs are good – but are they good jobs?

Of course the rise of employment – which is cited by this week’s IFS report as a key reason for decreasing income inequality – is good news. Employment is not only important in providing income but also in providing a sense of meaning and purpose.

But unless we are able to improve the quality of work (not just pay, but security and wellbeing too) then this won’t translate into real improvements in peoples’ lives. We need good jobs, not just any jobs.

5. For many, ‘disposable’ income is no such thing

The IFS income statistics are based on household income after taxes and benefits – generally known as ‘disposable’ income. But this widely used measure does not bear much relation to many people’s actual experience.

Lower income households often have to pay more for essential goods such as utilities, and this ‘poverty premium’ currently sits at £490 per year. They are more likely to take out consumer debt to pay for basics and then pay higher interest rates in repayments, and are also likely to pay a higher proportion of their income to housing costs.  Indeed, when taking into account housing costs, the fall in income inequality is much less than it actually seems.

Whichever way you look at it, we have an economy that urgently needs to change. To combat inequality, we need to be working on all fronts. At the New Economics Foundation we are pushing for policy changes that can help tackle some of the root causes of inequality.

While we live in a country where we cannot afford to adequately feed and clothe all our children, and where some people are valued over a hundred times more than others, we still have our work cut out.