He can call pay rises 'selfish' all he wants: austerity hasn't worked. 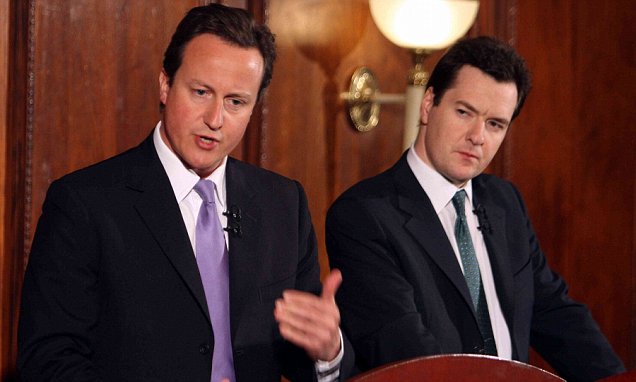 For a Prime Minister who set the wheels in motion for the UK to pulled out of the biggest trading bloc in the world, David Cameron’s intervention last week in the debate about ‘economic credibility’ raises eyebrows.

But his comments also have pointed out the central economic dilemma for Theresa May’s Government.

It’s this: should the Tories admit that the pain inflicted on the poor, the vulnerable and public sector workers since 2010 has failed, or continue with the austerity which helped deprive them of a majority in June’s General Election?

Cameron accuses the present Government of being “selfish” with the public finances in even considering lifting the public sector pay cap, while from his pulpit at the Evening Standard, former Chancellor George Osborne has said that an end to austerity will lead to a “loss of economic credibility” – even as his former colleagues scrambled to be first in line to call for a public sector pay rise.

The Tories are in such a mess on this issue that some claim that there has been no austerity at all while others parrot the slogan from 2010 that the UK remains close to bankruptcy. Never mind that the bankruptcy claim was always vacuous – how could the UK have been on the brink in 2010 and then be ‘recovering’ seven years later with the national debt having doubled?  In any case, a country with its own currency cannot go bankrupt since it can never run out of money.

Then there is the ‘intergenerational’ argument put forward for continuing austerity – “It’s unfair to saddle the next generation with debt” by “living beyond our means” in the present. The chart shows how ludicrous this argument is – the reality is that the UK’s national debt goes back to 1692 and has never been paid back in its entirety. The intergenerational argument is equivalent to saying that the Victorians had to pay for the Napoleonic wars, or that the Edwardians carried the costs of the Boer war, or that 1960s taxpayers paid down debt built-up in the 1930s Great Depression. Debt is always passed on between generations. For example, a World War I loan was only paid back in 2015.

The national debt today stands at £1.7tr, or about 89 per cent of GDP – although some have argued that around £435bn of this is now owned by the UK government as a result of its quantitative easing programme, so should not be included in the national debt total at all.

A public sector pay rise is predicted to cost £9bn per year, which could be borrowed or raised in taxes on the better-off. Yet what is often left out of such scaremongering is that HM Treasuring gets back at least 40 per cent of any rise through income tax, national insurance and VAT – while the economy receives significantly beneficial effects from public workers spending their extra pay.

Austerity, which has not worked in its intention of returning the UK’s national accounts to surplus, has had disproportionate and damaging effects on the nation’s most disadvantaged communities. Women, the unemployed, disabled people and low paid workers have borne the brunt of austerity, even as Osborne’s quantitative easing has boosted share value and the wealth of the rich.

Local government, social housing and welfare, upon which those at the bottom of the income spectrum most rely, have experienced the largest percentage cuts in spending. The rise in homelessness and rough sleeping, the steep climb in food bank usage, social cleansing in London, and perhaps even the Grenfell Tower fire, are all indicators of how spending cuts have adversely affected the disadvantaged.

What’s clear is that today’s national debt is nothing unusual when looking back at the last three centuries. Equally true is that paying down the public debt to lower levels following a spike usually takes at least a generation and should be achieved through long-term economic growth and improvements in productivity and exports – not by short-term attacks on public services.

One Response to “David Cameron should pipe down on ‘credibility’: the UK has always been in debt”