Activists are trying to disrupt Cuadrilla's work through direct action 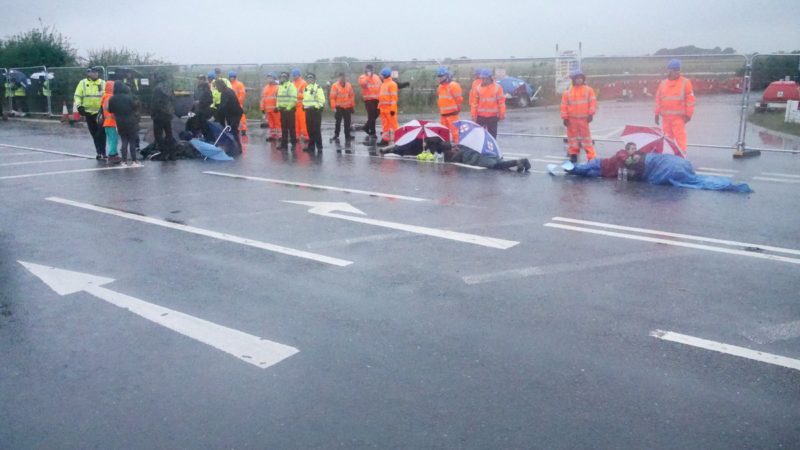 Eight anti-fracking protestors this morning blockaded the road to a fracking site in an effort to oppose plans to extract gas in Lancashire and across the country.

The blockade, which began at 5.15am this morning, is part of a long-running battle between local residents and environmentalists, and fracking companies.

Last year Sajid Javid overturned Lancashire council’s rejection of a fracking site, giving shale company Cuadrilla permission to drill in the county. The council turned down the company’s planning applications to frack – saying it would have negative visual and noise impacts.

A YouGov showed 66% of Lancashire residents oppose fracking near their homes.

Local residents and activists oppose the plans on environmental grounds. Nicole from Mosborough Against Fracking explained:

“Fracking isn’t just threatening the water and peoples health up here in Lancashire – it’s happening right across the country. I live in an area that is currently being seismic surveyed by INEOS and we’re determined not to let them get as far as Cuadrilla have here.”

Since the beginning of July the protestors have successfully disrupted work over 8 days. The longest blockade stretched over July 3rd and 4th and lasted 36 hours.  The aim of the protest, which activists have dubbed ‘Rolling Resistance month of action, is make it difficult for Cuadrilla to build two wells in a field on Preston New Road and disrupt their work for every day in July.

One of the protestors said this would set a precedent in the UK, as this would become the country’s first multi-well fracking site:

“Cuadrilla’s site at Preston New Road is the flagship project for the entire Hydraulic Fracturing industry in the UK. All the different fracking companies are watching how things play out here to determine the feasibility of their projects. Cuadrilla is already months behind schedule and investors are pulling out of the industry. It is crucial that we all unite to prevent this from going ahead here, as this will influence unconventional oil and gas projects right across the country.”