Should Scotland and Wales get increased funding too? 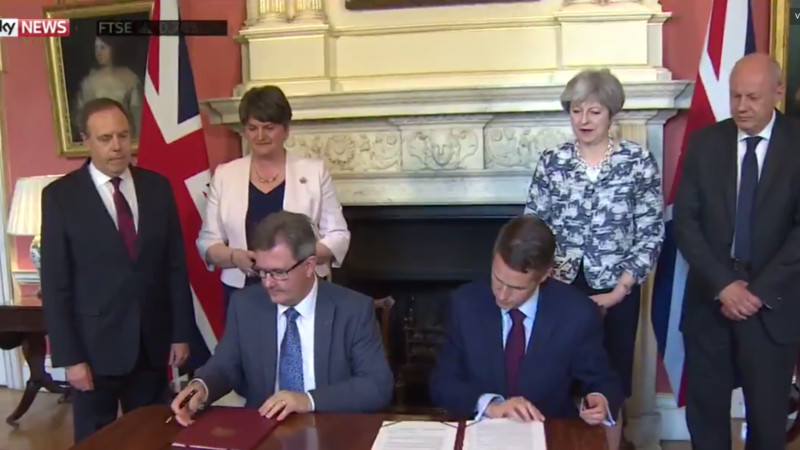 The deal between the DUP and the Conservatives, signed this morning and worth one billion pounds to Northern Ireland, is already triggering a debate about what should be granted to the other nations of the UK.

At the heart of the debate is the Barnett Formula. Devised by the now deceased Joel Barnett when he was Chief Secretary to the Treasury under Harold Wilson and James Callaghan, the formula is relatively simply. As a House of Commons Library note states:

“When there is a change in funding for comparable services in England, the Barnett formula aims to give each country the same pounds-per person change in funding. In general, if a service is devolved it is considered to be comparable.”

If therefore the UK Government splashes the cash in Northern Ireland, do the other nations of the UK stand to benefit proportionally the same amount?

That’s correct according to Scotland Secretary, David Mundell. The Sunday Post over the weekend quotes him as saying:

“We’re going to have a totally transparent arrangement with the DUP. I’m not going to agree to anything that could be construed as back-door funding to Northern Ireland. There are rules. The Barnett Formula is to Scotland’s advantage. I’m not going to do anything to prejudice it. Any funding that goes to Northern Ireland, then Barnett rules will ensure the appropriate funding comes to Scotland.”

Mr Mundell then must be feeling both let down and humiliated by the Telegraph this morning, which reports that ‘Scotland and Wales will not automatically get any extra money from Theresa May’s billion-pound deal with the Democratic Unionist Party.’

The paper quotes an unnamed source as saying that the DUP deal was a ‘unique situation’ which would not be covered by the Barnett Formula. The paper continues:

“It is understood that the Government will argue the handouts are ‘grants’ rather than extra departmental spending which would normally trigger the mechanism.”

Little wonder then that Welsh First Minister, Carwyn Jones, last week warned of Wales losing out as a result of the DUP’s ‘power bribe’.  Referencing the negotiations between the DUP and the Tories he said:

2 Responses to “Will the Barnett Formula be triggered following the DUP’s £1bn ‘power bribe’?”