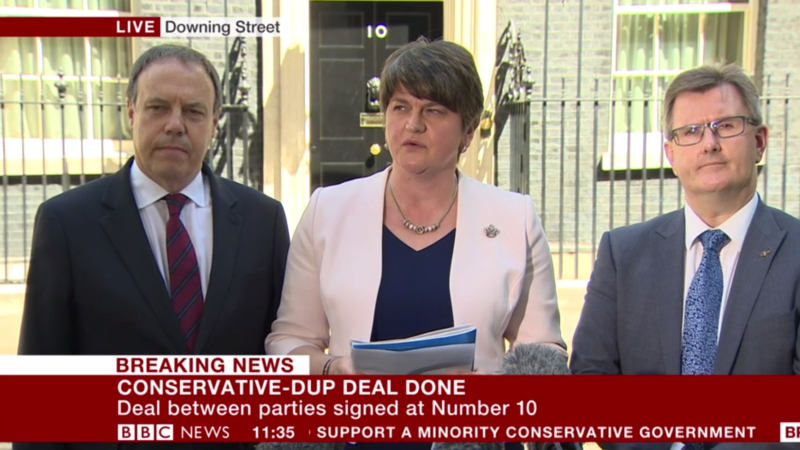 The Conservatives have reached a ‘confidence and supply’ arrangement with the Democratic Unionist Party (DUP), Downing Street has announced this morning.

The DUP will prop up the minority government, providing support on key votes. The deal will allocate an additional one billion pounds to Northern Ireland, as well as preserving the pensions triple lock and the universal winter fuel allowance, contrary to the Conservative manifesto.

DUP leader Arlene Foster: “We have reached an outcome that is good for the UK, for Northern Ireland and allows our nation to move forward” pic.twitter.com/lJDiUcPhVr

Arlene Foster said her party was ‘delighted’ to have reached the agreement. While Theresa May said the parties ‘share many values in terms of wanting to see prosperity across the UK, the value of the union, the important bond between the different parts of the United Kingdom’.

However, many within the Tory party are considered about the toxic reputation of the DUP, particularly with regard to abortion and same-sex marriage. There are also major concerns about how the arrangement will affect negotiations to rebuild the power-sharing executive in Northern Ireland.

The deadline for those talks is this Thursday. The full text of the DUP-Tory deal is available online.

See also: Who are the DUP? Extreme social conservatives who have blocked gay marriage and abortion in Northern Ireland