May has done nothing to safeguard the Paris Agreement 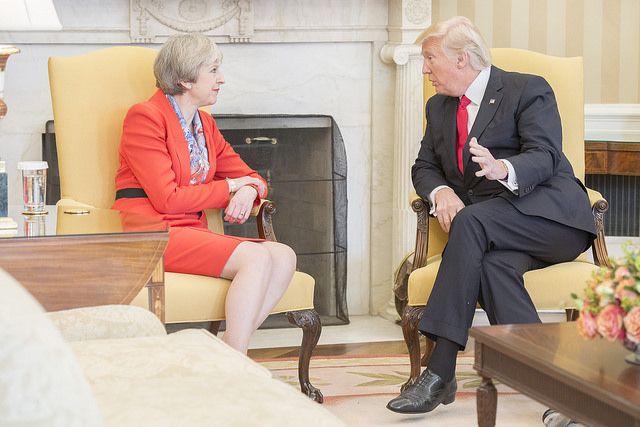 The Tories are good at grand rhetoric on the environment. From ‘the greenest government ever’ to ‘the first generation to leave our environment in a better state than we found it’, we’re often told how preserving the environment is a Conservative value. But while Thatcher may have been the first world leader to warn of climate change, Theresa May was happy to stand by and do nothing as Trump destroyed years of progress towards solving it.

The current Conservative manifesto claims that, if elected, a Tory government would ‘continue to lead international action against climate change’.  Yet from the G7 to stump speeches, May turned down every opportunity she had to try and protect what is undeniably the most important document for international climate cooperation. Of the world’s six biggest economies after the US, the UK was the only one not to say anything publicly about Donald Trump’s threat to leave the agreement.

What makes it worse is that May should have been in a unique position to influence the Trump administration. Our special relationship was the very reason we were meant to tolerate the hand holding, state visit and May’s rush to Washington. Either this relationship is meaningless and the UK has no influence — in which case why not join the world in publicly condemning Trump’s actions — or May just doesn’t see climate change as a priority, unwilling to speak out for fear of upsetting the likes of trade deals post-Brexit.

Downing Street’s woefully weak reaction was the final nail in the coffin. Whilst everyone from Merkel to Trudeau personally spoke out against the move, reaffirming the importance of collective action, May hid behind a bland Downing Street briefing which expressed its ‘disappointment’. While Macron delivered a heartfelt message to the American people, May was nowhere to be seen.

Not only did she stay silent, but May actively refused to join our European partners in a show of solidarity, turning down the opportunity to add her name to a joint statement with France, Germany and Italy. As Jeremy Corbyn argued earlier today, given the chance to present a united front with our international partners, May ‘instead opted for silence and subservience to Donald Trump’.

Depressingly, this isn’t surprising. For all their slogans and rhetoric, the Conservative record on the environment is atrocious. The party that promises to lead on international climate change is the same party that was caught trying to water down the EU’s flagship energy efficiency policies. It is the same party that hit parts of the solar industry with an 800 per cent tax rise, and refuses to support onshore wind in England, despite it being the cheapest form of renewable energy. It is the same party that is in danger of missing the UK’s legally binding climate targets for 2030.

The Tory record on the environment is a litany of delays, broken promises and apathy. It doesn’t have to be this way. While May stayed silent as Trump attacked the Paris Agreement, Labour has pledged to stand up to the US on climate change and our shared values. A Labour government would put the UK back on track to meet its targets in both the Climate Change Act and the Paris Agreement. Rather than abandoning our international partners, Labour would work more closely to tackle a host of environmental challenges — from air quality to new environmental standards at the WTO.

As Britain prepares to leave the EU and start a new national chapter, we can’t afford a government that is content to do nothing and watch from the wayside. From the economy to climate change, we need bold and ambitious leadership – and Theresa May’s dereliction of duty over Trump shows she’s simply not up to the job.

4 Responses to “Dear Theresa May, holding hands with a fossil fool is not what strong leadership looks like”