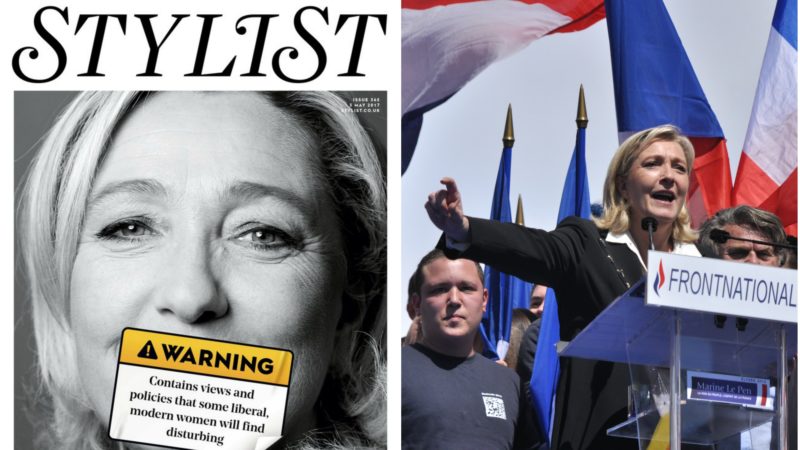 On this week’s cover, Le Pen appears with a sticker over her mouth, reading:

“Warning: Contains views and policies that some liberal, modern women will find disturbing”

The image has been widely criticised for trivialising the extremist Le Pen campaign, implying that the Front National’s policies are cheeky and challenging, rather than structurally racist, Islamophobic and anti-Semitic. 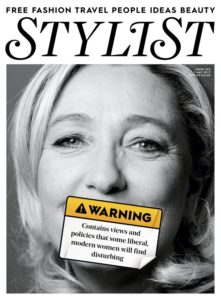 And while the full article is less egregious than the cover might suggest, it treats Le Pen’s campaign for president as an ordinary political event, failing to acknowledge that — no matter how much she attempts to ‘detoxify’ — Le Pen is a fascist.

Although she is more image-aware than her father, she has a full suite of aggressive anti-immigrants policies, has regularly dabbled in Islamophobic and anti-Semitism, and continues to affiliate herself with a party that remains structurally violent and racist.

Normalising these views is dangerous, contributing to the idea that the far right is not actually beyond the political pale, and that it is socially and politically acceptable to vote for them. And creating a glamourous fascist aesthetic — as the Stylist cover does — makes such a vote more attractive.

The magazine’s editorial team have responded to the outcry, claiming that Stylist ‘vehemently does not support her or her views, and any misinterpretation of our stance on Marine Le Pen is regrettable and unintended.’

They defend the cover as ‘a visual gag’, insisting that:

“by covering Marine Le Pen’s mouth with a ‘warning’ sticker we were — by way of a graphic device — labelling her rhetoric (and sheer existence) a very dangerous thing.”

The success of France’s fascist right is a dangerous thing. As such, it must be handled extremely carefully.

The Stylist cover may not have been malicious, but it was undoubtedly clumsy.

See: Marine Le Pen stepped down as Front National president four days ago – and her replacement has already resigned in disgrace