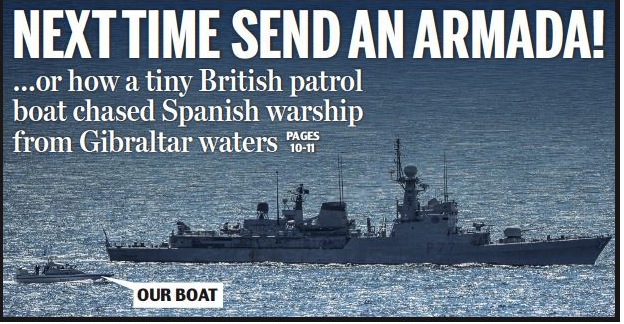 The Daily Mail have got very excited that the British Navy has small boats, and sometimes large Spanish boats enter British waters.

That seems to be the extent of the story that receives the front page splash today, in which a Spanish naval vessel was escorted out of Gibraltar’s by a Royal Navy patrol boat.

Oftentimes, patrol boats – which are small – are the ones to do this, as they are often – patrolling.

Of course, the history buffs at the Mail couldn’t resist a reference to the Spanish Armada, which seems very relevant in the 21st century when we’re discussing a close ally.

The Spanish warship passed into British waters, an event The Guardian describes as “frequent”, and something that “might normally have passed without notice”. They point out that actually, it is unusual for the Spanish boat to be escorted out in such a way.

But, y’know, that doesn’t make quite as good a story. Why let broader context get in the way?

See: If the Tories care so much about Gibraltar, there was a simpler solution than going to war