Article 50 ruling met with more 'enemies of the people' tripe 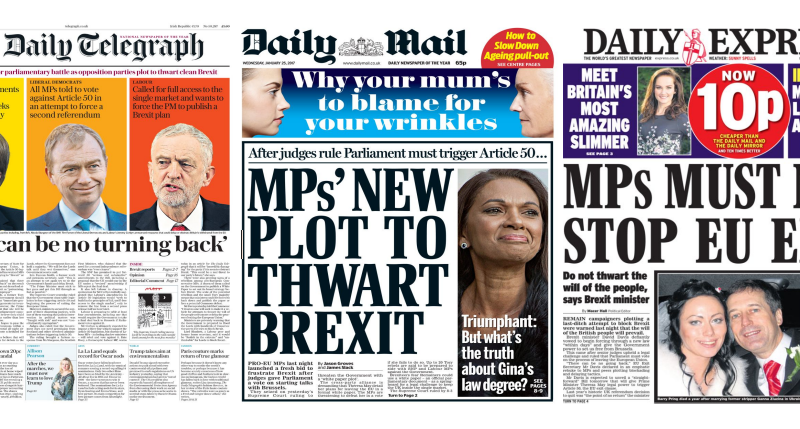 Today’s headlines from the pro-Brexit press don’t call opposition parties (and rebel Tories) ‘enemies of the people’, but they might as well do.

The Daily Mail warns of ‘MPs new plot to thwart Brexit’, alongside a renewed attack on Gina Miller, who brought the court challenge to Theresa May’s bid to bypass parliament on Article 50.

It speaks of a ‘white paper plot’, as if passing laws is now an act of treason.

“Jeremy Corbyn and Nicola Sturgeon were last night plotting to undermine Theresa May’s plan for a clean Brexit as the government insisted there was ‘no going back’ on the vote to Leave.”

It matched this with a helpful guide to the chief ‘plotters’, which resembles more than a little the Mail‘s infamous judges splash: 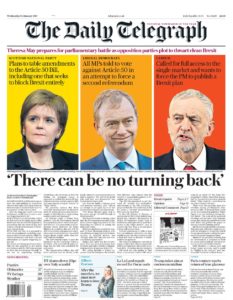 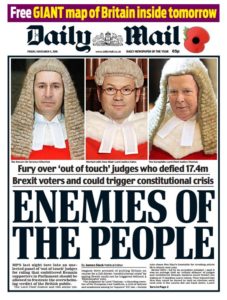 Of course, that Brexit Pravda the Daily Express, joined in the fun:

“Remain campaigners plotting a last-ditch attempt to block Brexit were warned last night that the will of the British people will prevail.”

Take note: this is all from news coverage, not the editorial pages.

Thank heavens we Brits are spared the scary nationalism taking power in America!