It shouldn't be this hard to spot the difference 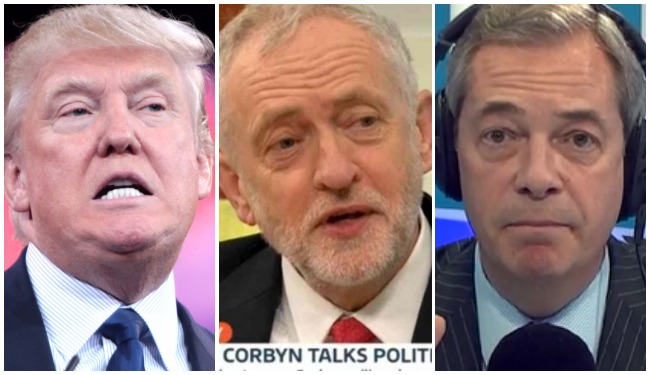 After saying he thinks ‘the future integrity of NATO is actually very important’, he said:

“I wouldn’t want to live in Putin’s Russia. I don’t approve of many of the things that he’s done.

But the European Union have dragged NATO in their wake and have pursued a very ignorant, a very foolish foreign policy by constant eastwards expansion and trying to get countries that border Putin’s Russia to join our politican union in the West.”

This is typically shady. In the past Farage has gone further, saying Putin is the world leader he most admires, and blaming the EU for Russia’s invasion and annexation of Crimea.

One expects this sort of Moscow-friendly line from right-wingers like Farage. But how different is his position on NATO and Russia from that of Jeremy Corbyn?

As Trump’s links with the Kremlin dominate the news, a Corbyn spokesman was asked by reporters about 800 extra UK troops being stationed in Estonia as part of a NATO force. He replied:

“Jeremy has said repeatedly that he has lots of criticisms of the Russian government, both in relation to what has happened in the Middle East and domestically. But what we don’t want to see is a ratcheting up of tensions between Russia and the West, as has been taking place.

We want to see an engagement with Russia, on a critical basis but on a serious basis.”

Asked specifically about the NATO troops in Estonia, he said:

“Jeremy has expressed concerns about that being one of the escalations of tensions that have taken place.”

The spokesman also failed to give a clear answer on whether a Corbyn government would defend a NATO member country militarily if it were attacked by Russia, as per Article 5 of the NATO treaty.

His comments were slammed by Labour’s shadow defence secretary Nia Griffith, who is reportedly ‘livid’ about the remarks. But Corbyn has repeatedly said the same himself, including as recently as November. And as late as 2014, before he was leader, Corbyn was saying NATO should be ‘closed down’.

The spokesman has not been named, but his remarks are in line with the views of Corbyn’s Director of Strategy and Communications, former Guardian writer Seumas Milne. As Left Foot Forward reported at the time, in March 2015 Milne hosted a propaganda event in Moscow with Vladimir Putin, and has repeated the Kremlin line on Ukraine in print.

It stands to reason that the Left can’t scrutinise Farage and Trump’s positions on Russia and European (or Middle Eastern) security while suspending criticism of Labour’s position on the same issue. In the past, fierce debate over Labour’s foreign policy on Iraq was not considered heretical or out of bounds – quite the contrary.

Given the wars, refugee crises, and rise of demagogic politics across the world, might the British Left start 2017 with some ‘joined up thinking’ on foreign policy without fear of red-on-red friendly fire?