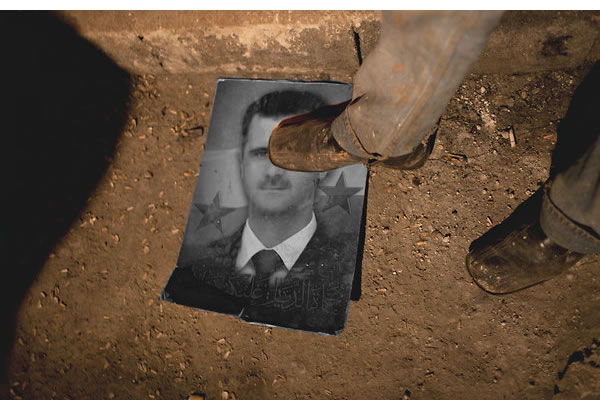 Tobias Ellwood, the government’s minister for the Middle East, sent the following Tweet today to the Russian Ambassador:

To Russian Ambassador @Amb_Yakovenko :emergency Commons debate on Syria today. Please say what you are doing to help those trapped in Aleppo pic.twitter.com/fdp9ygWKPk

The ferocity of those crimes is escalating by the hour, but they have been ongoing for years. As crimes against humanity, they are attacks not just on Syrians but on the common security of us all.

A UK minister should not be pleading with a representative of a joint criminal enterprise for mercy. We should be defending our common humanity, our shared security, robustly and relentlessly.

There are still people alive to be saved: on the run in Aleppo, under siege in Madaya and the suburbs of Damascus, in prisons across Syria. There are many possible actions that we and others have proposed that haven’t been attempted by our government.

We haven’t seen UK airdrops, even to areas away from the Russian focus of operations such as Madaya which is only minutes from Syria‘s border.

We haven’t seen RAF surveillance drones make their presence felt over hospitals and other civilian targets to deter war crimes.

We haven’t allowed our much discussed prospective allies against ISIS, the Free Syrian Army, to have the means to defend themselves and their fellow Syrians against Assad’s and Putin’s air attacks.

We haven’t done anything to constrain Assad’s ongoing chemical attacks, despite the fact that Israel has regularly enforced its own red lines by carrying out air strikes against Assad and Hezbollah forces.

This is a war against humanity, a war against every law and convention that keeps us secure. We must defend ourselves now and end Assad’s and Putin’s slaughter.

See: Peter Tatchell: Aleppo is today’s Guernica. Where is Labour?

3 Responses to “Syria is a war against humanity: We must defend ourselves”