Sturgeon puts May between a rock and a hard place 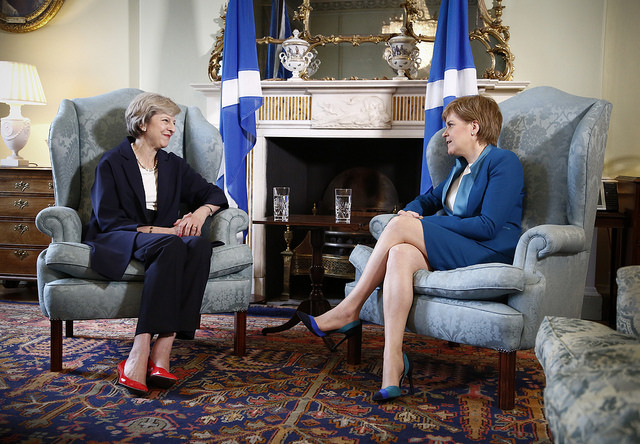 Make no mistake about it, the Scottish government’s proposals for Scotland’s relationship with the EU post-Brexit are less a pragmatic set of ideas and more a back door to Scottish independence.

While peppered with reminders that Holyrood’s preference is either for the UK to remain in the EU or ideally for an independent Scotland to remain in the EU, today’s document seeks to address the challenge of the UK leaving the single market.

The Scottish government proposes therefore a way of keeping Scotland in the single market with all the necessities for freedom of movement that go with it, even if the UK leaves.

Whatever the SNP’s views might be, this would inevitably lead to a harder border between Scotland and the rest of the UK to prevent those allowed in Scotland under free movement entering the UK.

The borders with Scotland would represent the point at which different standards for goods would be felt and seen. Ministers at Holyrood also propose that the Scottish government be given the power to negotiate international agreements.

If this doesn’t look like the emergence of a sovereign, independent Scotland, I’m not sure what would.

Officially, Theresa May has pledged to look carefully at the proposal, but the reality is that she is between a rock and a hard place.

In the unlikely event of her agreeing to the demands, she will be giving the green light for Scotland being to do whatever it wants on the international stage.

Alternatively, if the PM rejects it she plays into the arms of the SNP and others who argue that she is disrespecting the wishes of the people of Scotland to remain in the EU.

This then takes us back to the idea of a second referendum on Scottish independence.

Over the weekend the former SNP leader and First Minister, Alex Salmond, argued that a second independence vote could be won. This was despite polling by YouGov for the Times having seen support for independence fall from 46 per cent in August to 44 per cent in November.

As with much about Brexit, we end the year with high levels of uncertainty about the way forward.

Question marks hang over whether Nicola Sturgeon would take the plunge and seek a vote on independence any time in the near future. I’m not holding my breath on this though.