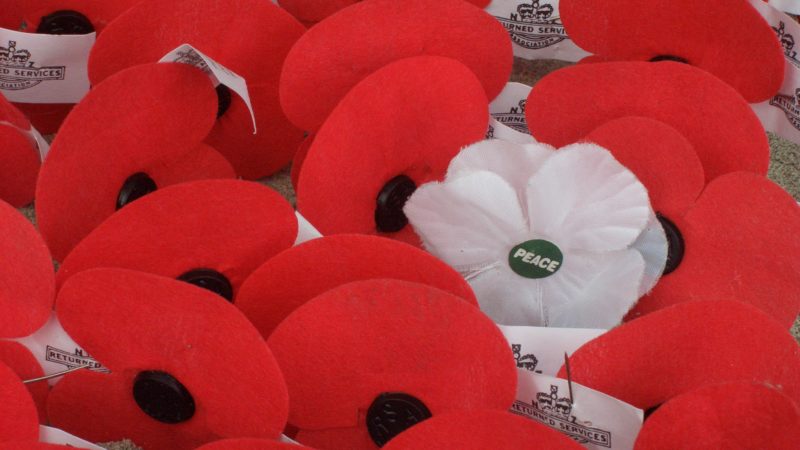 Remembrance Day is about joining together to respect the dead and we each have our own memories when we do so.

Personally, I  wear a red poppy, but I wear a white one too. One of the defining features of modern wars is the vast numbers of civilians who are killed as well. Over 140,000 civilians are estimated to have died in the Iraq war or its aftermath.

The white poppy is one way of remembering them. From those thousands in Iraq, to the Londoners who died in the blitz and the citizens of Nagasaki and Hiroshima, the white poppy speaks for them. When the red wreaths are laid at the cenotaph and at numerous memorials around the country, would a wreath of white poppies be out of place? Should we remember all of the dead, or only those in uniforms?

The Republic of Ireland footballer, James McLean refused to wear one at a Wigan game because of the British army’s role in Northern Ireland. Would some English or Scottish players feel awkward about wearing a red poppy if England were playing Ireland next week, or even Germany? After all, none of us should feel obliged to wear, or not wear, a poppy.

I feel that the dead from the numerous conflicts and wars need to be remembered. The reasons why we remember them will vary. For some it is the loss of relatives or friends. The dead should not be forgotten and the British Legion works extremely hard to ensure that the families of people in the services are supported.

The white poppy was first introduced by the Women’s Co-operative Guild in 1933 and is now sold by the Peace Pledge Union. Their motto is:

“War is a crime against humanity. I renounce war, and am therefore determined not to support any kind of war. I am also determined to work for the removal of all causes of war.”

That belief; that we should not only remember the dead, but also think about the reasons they died, has always been surrounded by controversy. Some women lost their jobs in the 1930s for wearing the white poppy, on the basis that their campaign undermined those who been killed in service.

In the 1980s, Margaret Thatcher expressed her distaste for the white poppy. I hope Theresa May will refrain from being equally divisive. If not wearing a red poppy or wearing white one is ‘making a statement’, then why is a red poppy not a statement? Why have statements become undesirable? Surely the point of Remembrance Day is to give us a collective space to think about it all?

The Royal British Legion seems fairly relaxed and play down the controversy. They say on their website: ‘We have no objection to white poppies, or any group expressing their views. We see no conflict in wearing the red poppy alongside the white poppy.’

Remembrance Day is about joining together to respect the dead and we each have our own memories when we do so. Personally, I respect the dead by taking a moment to think, to question and to act according to my conscience.

See also: Poppy wars are a seasonal distraction from the horrors of today

11 Responses to “What if a British footballer wanted to wear a white poppy?”