John Woodcock MP says 'we must do more' to help Aleppo 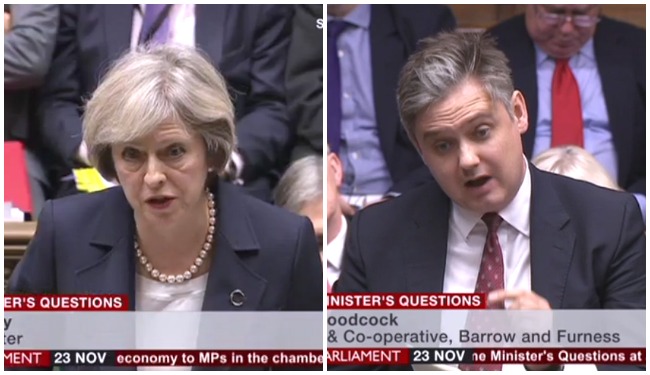 Theresa May had no answer on aid drops for Syrians in Aleppo facing bombings and starvation when asked at today’s Prime Minister’s Questions.

The PM was asked by Labour MP John Woodcock whether the government would ‘revist’ aid drops in light of the destruction of Aleppo’s last hospital over the weekend.

But May did not reply, instead taking up another part of his question, about stripping Russia of the right to hold the 2018 World Cup.

It comes as Raed al-Saleh, leader of the ‘White Helmets’ civil defence force, was in Westminster to warn Aleppo is on the brink of mass starvation, and called on coalition forces to use their planes, stationed to conduct airstrikes on ISIS, to drop aid to besieged civilians.

Woodcock, who was on the defence select committee from November 2013 to March 2015, asked:

“Aleppo’s hospitals are destroyed, and Syrians who avoid the barrel-bombs and the chlorine gas are starving from the Russian-backed blockade.

We must do more. So will she [the PM] revisit the prospect for aid drops, and will she look at backing the campaign to stop this daily perpetrator of war crimes [Russia], of stripping them of its right to hold the 2018 World Cup?”

May replied the UK should do ‘all that we can’ to stop the ‘appalling atrocities’ in Aleppo, and said Russia was being pressured to stop its attacks and support a political settlement in Syria.