Reject this big state garbage while you still can 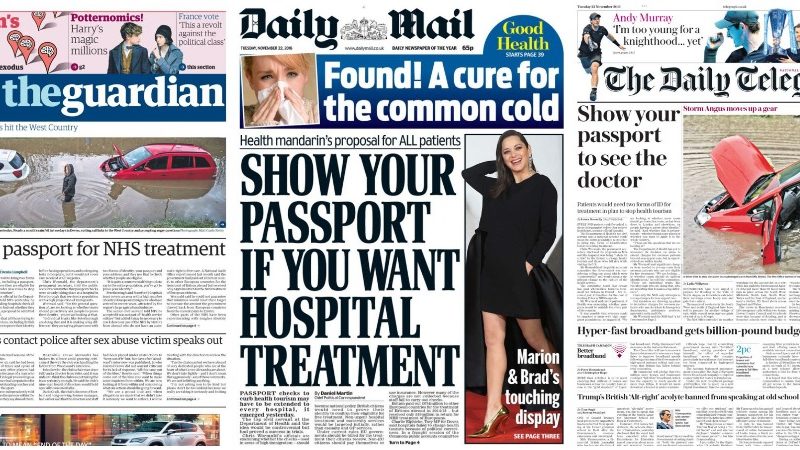 Popular mandates are all the range these days, especially when derived from a vaguely worded plebiscite. By this means, David Cameron could claim his general election win in 2015 as a ‘mandate’ for an EU referendum, in the absence of any evidence this was the deciding factor for a majority of voters.

Similarly, Theresa May can claim the Leave result of that referendum as a verdict on ‘mass immigration’ when the question on the ballot paper said nothing of the kind.

Alright then, where is the popular mandate for asking British citizens to show their passports when using the National Health Service?

Today’s papers are awash with reports Chris Wormald, permanent secretary for Health, is considering just such a scheme to crackdown on ‘health tourism’, by which foreigners (boo!) come to the UK deliberately to use the NHS.

Never mind the lack of evidence for this being a problem worth noticing, with a government-commissioned 2013 report finding it ‘impossible to estimate with confidence’ the cost to taxpayers.

At most it’s thought around £200 million out of an NHS budget of £1.8 billion gets spent on mysterious interlopers who travel the globe looking for cheap healthcare. £49 million of this is recouped from EU countries, with the government seeking to increase this to cover the £200 million.

A bigger question is this: by what right does the government require citizens to take their passport with them to the hospital to prove they are worthy of treatment? When was this ever put to the British people, or even to their representatives in parliament?

Will there be an exemption for A&E treatment, so people are not turned away for having neglected to bring their passport when they left their house on the day of an accident? And if so, wouldn’t all those sneaky foreigners just go to A&E for their taxpayer shakedown?

And how likely is it that a government which won’t guarantee the rights of EU-born residents after Brexit won’t use the spectre of ‘deliberate health tourists’ to target people living here who are not British citizens for health discrimination?

Not very. And as ‘a source close to the Health Secretary’ told the Guardian, ‘checks might only be applied in areas with shifting populations and large influxes of immigrants’. So it would be a racist policy as well.

Any attempt to introduce collective punishment for such a flimsy problem should bypass Theresa May’s contempt for parliament and be debated by MPs.

But it shouldn’t get that far. As Labour’s shadow health secretary Jonathan Ashworth points out, this is a desperate attempt by a clueless Health Secretary to shift blame from his own poor management of the NHS.

Its road-testing in the papers today should lead the public to demand to know how the government got the idea it has a mandate to turn Britain into a country where people have to carry their passports in case they fall ill or have an accident, or to access services they pay for and have enjoyed as a right for 70 years.

See: Hey, Daily Mail: Austerity is what’s ‘going on’ in our prisons

4 Responses to “NHS passport checks for British citizens – who voted for that?”