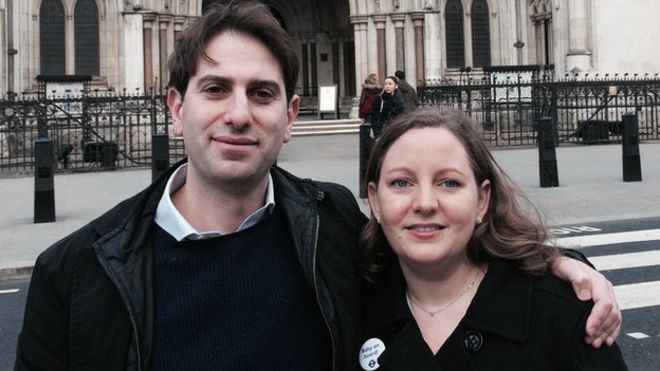 Equality activists took their fight for different-sex civil partnerships to the Court of Appeal today as they seek to overturn the government’s ban.

Rebecca Steinfeld and Charles Keidan are campaigning for civil partnerships to be open to different-sex couples after they were denied the union in 2014.

The couple were joined by demonstrators outside the Court – including human rights activist Peter Tatchell and the Deputy Leader of the Green Party Amelia Womack.

Steinfeld and Keidan’s legal team are arguing the ban on different-sex civil partnerships is unfair because it treats people differently based on their sexuality.

“We are going to the Court of Appeal on behalf of ourselves and the more than 70,000 people who have signed our petition calling for civil partnerships to be open to all.

“The government has everything to gain by opening civil partnerships to different sex couples.

Civil partnerships already exist for same-sex couples. It would now be fair, straightforward and popular for the government to extend them to everyone.”

The couple were also backed by Liberal Democrat MP Alistair Carmichael, who helped to steer equal marriage through parliament in 2013, as well as author and campaigner Owen Jones, who said:

“Many people don’t like the historic baggage of marriage and everyone should have the right to express their love in a way that works for them.

I want equality for everyone and that means giving mixed-sex couples the right to a civil partnership.”

At the rally outside the Court, the Greens’ Amelia Womack told campaigners:

“This is about equality and everyone’s right to choose the type of union that works for them.

There are many reasons why people don’t get married and many why they’d want to get a civil partnership instead, and it’s time that was respected.

This afternoon the London Assembly voted to back the unions following a motion by the Greens’ Caroline Russell AM.

Keidan and Steinfeld’s case was taken to the Court of Appeal after an earlier case in January was refused – however the Judge said there was a ‘wider public interest’ at stake and that it was an issue ‘many would sympathise with’, granting the right to appeal.

On the 21 October, Martin Loat and Claire Beale became the first different-sex couple from the UK to get a civil partnership in the British Isles when they flew to the Isle of Man for the ceremony, with Loat saying:

“We had a wonderful time visiting the Isle of Man but for many people living in the UK this simply isn’t an option. People should be able to get a civil partnership near their home and their family.”

The case is being backed by the Campaign for Equal Civil Partnerships, a group set up by those affected by this case, with the final Court of Appeals decision being made potentially by the end of the year.

Josiah Mortimer is a contributing editor to Left Foot Forward

See: Five reasons David Cameron should not be LGBTQ ‘Ally of the Year’