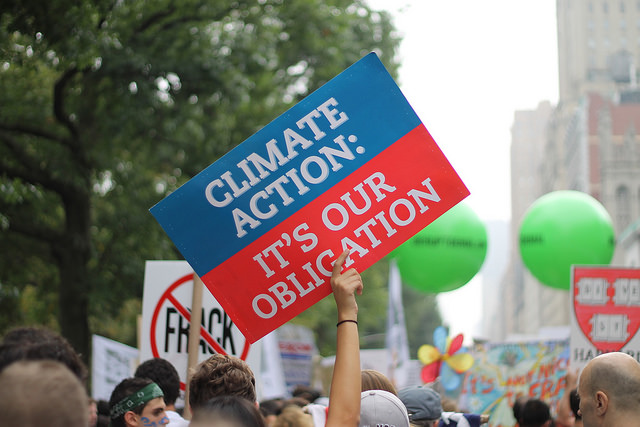 The UK government has ratified the Paris climate change agreement. With ratification from over 110 countries the agreement has come into effect and a path for a transition to a global low carbon economy is becoming clearer.

Countries around the world have embraced this agenda as a source of economic renewal and competitive advantage. They have acknowledged that a low carbon transition is a strategy that creates jobs, improves the quality of life and improves public health.

The outstanding questions for us is what type of transition we will have here?  Does the government see this as a chance to forge a new type of economy?

Will this government to use its industrial strategy to rebalance the UK economy and gain the benefits of low carbon transition?

Doing so would make a huge difference to the economy and would have scope to address the challenges of widespread fuel poverty, and rising energy bills while securing the jobs that go with renewing our infrastructure and building our economy for the 21st century.

Greg Clark’s industrial strategy is the vehicle that could release the benefits of a greener global economy, serviced by the UK and securing many place-based jobs across numerous growing sectors including energy, retrofit, construction, transport, materials, waste management, housing, finance and governance.

A successful industrial strategy will understand the importance of place, which underpins many service and manufacturing sectors, be that in the nature of the land, of agglomeration or of energy production and use.

Communities of place, in our villages, towns, and cities, will be a key driver for such a strategy as they can be the places of the makers, and with the right local leadership, also provide opportunities to demonstrate what can be done.

There is a clear choice. Continue to ignore the direction the world is heading in or to embrace a new direction that is a win-win.

An absence of vision or inaction will set the country back, as others move forward.  The challenges of renewing the economy can either be met with the future in mind, or by piecemeal ‘fixes’ that put off the challenge for another day.

It is could end up being about reacting, trying and often failing to catch up, which will have consequences across the economy. Jobs are less likely to be well paid, and fewer in number in both services and manufacturing.  And an energy transition that will be more expensive, higher carbon and more dependent on imports, of both raw energy and of technology.

Meanwhile, our health will suffer as air quality will take longer to address, and as weather events such as the 2013 European heat wave prompt more deaths in summers to come.

The environment will degrade at a faster rate, reducing its capacity to mitigate climate change impacts; with reduced biodiversity and poorer quality of life. Floods will become more expensive and commonplace across the country.  And energy and infrastructure bills will be higher, much higher, than they needed to be because we acted late and acted without a plan.

The kind of transition that we have matters.

A transition built on the common good

As Ruth Davis puts it, in the TUC’s ‘Green Collar Nation’  report, we must “build on the politics of the common good, seeking active co- operation in solving a shared problem, developed through strong relationships, robust institutions and the harnessing of technological innovation and optimism wherever it can.”

There are plenty of examples of where local action, based on returning decisions to people, is already happening and these efforts must be shared and scaled across the country.

There are a multitude of UK-based community energy schemes, not-for-profit groups that help communities own and generate local energy. Not only do these provide energy at fair prices, they can often generate a surplus for local community benefit and further action.

And then there are bigger energy initiatives. Municipal energy companies are being revived, as Stoke-on-Trent, Bristol, Peterborough, Nottingham and others build their local capacity for energy generation and supply for local benefit. Local and municipal clean energy generation should play a role in this transition across the country and support should be given to places wanting to start their own initiative.

And we should not forget the community and local organisations that install household energy efficiency and insulation measures; or those that help grow the green spaces and street trees, which cool the local environment and provide significant health benefits; or neighbourhood and street by street schemes that help people share and compare information on their energy use and promote the benefits of energy saving;

Another example is the ‘mini-Holland’ scheme being rolled out in London – reducing traffic flows, fossil fuel use, local air pollution, while improving community and public space.

A just transition will require this sort of local decision making, and national level action now. In creating BEIS the government has recognised the importance of integrating energy investment with industrial strategy.  Both require proper engagement with the places and communities that are best suited to particular energy generation, different types of manufacturing, and the service sectors that benefit from symbiosis and close proximity.

Making the most of all of these places will help fulfill the government’s ambition to re-balance the UK economy, providing the opportunities for our villages, our towns and our cities across the whole of the UK to grow and thrive.  This is particularly true if the UK’s energy and industrial strategy –  like that of most other nations – takes the Paris commitments into account.

Ratifying the Paris agreement could just be a symbolic act.  Or it could be the spur to creating an industrial strategy that makes the most of Britain.

The government’s first steps should include –

With these processes in place, we can begin the journey to a Britain where we, the people, help deliver the future that humanity needs.

Scott Langdon is an environmental campaigner for Here Now

Hywel Lloyd is a Sustainability Advisor at Facilitating the Future