A gender expert and a shameless misogynist walked into a debate 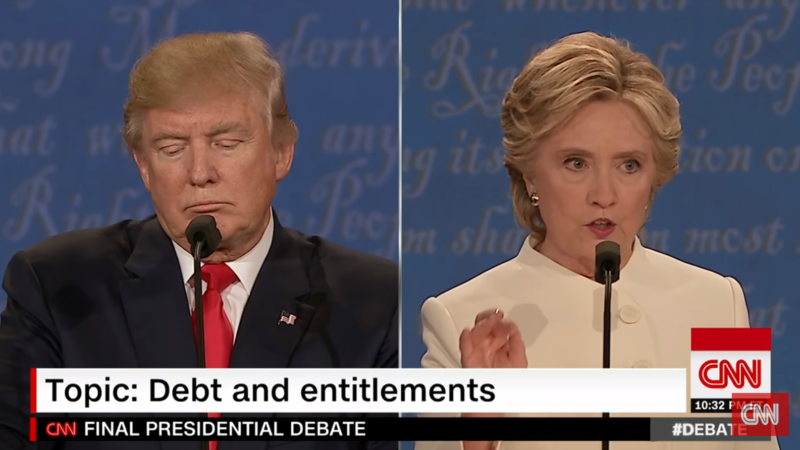 In the dying moments of last night’s final presidential debate, Donald Trump needed something special. Despite his strongest performance yet, he was clearly losing and needed to pull something powerful out of the hat.

So while Clinton was answering a final question on taxation, he leaned into his mic and said:

“Such a nasty woman.”

In the final days of this campaign, which he looks almost certain to lose, we can expect Trump to replicate this moment again and again. He will call Clinton nasty, crooked and untrustworthy. And he will highlight that she is a woman which, to Trump, may be her greatest failing of all.

However, rather than downplaying the gendered elements of this campaign, in last night’s debate Clinton put them front and centre.

In discussion of abortion and sexual assault in particular, she demonstrated that her expertise and understanding of gender politics, and so-called women’s issues, comfortably outstrips that of any other modern presidential candidate.

In response to Trump’s grotesque and medically inaccurate descriptions of late-term abortions, Clinton took a firm but compassionate stance, centred on the experience of real women and grounded in deep understanding of Roe-v-Wade:

“The kinds of cases that fall at the end of pregnancy are often the most heartbreaking, painful decisions for families to make. I have met with women who toward the end of their pregnancy get the worst news one could get, that their health is in jeopardy if they continue to carry to term or that something terrible has happened or just been discovered about the pregnancy. I do not think the United States government should be stepping in and making those most personal of decisions.”

When Trump dismissed accusations of sexual violence, saying the women who have come forward are simply seeking ‘ten minutes of fame’, Clinton located his comments within a much broader trend of misogyny:

“Donald thinks belittling women makes him bigger. He goes after their dignity, their self-worth, and I don’t think there is a woman anywhere who doesn’t know what that feels like.”

Women do know what that feels like, and they need a leader who understands how they feel, and has the capacity to respond.

Beyond the symbolic value of having a woman in the White House, the U.S. needs a president who can identify and dismantle mainstream political misogyny, who will fight against the rolling back of abortion rights and who — after a campaign in which women have been routinely objectified, dismissed and devalued — will recognise women as full and equal citizens.

Of course, Clinton’s efforts towards equality have been imperfect. Like so many feminists, she must do much more to convince women of colour, poor women, trans and non-binary people, migrant women and many others that she has something to offer them too.

Moreover, feminist policy-making is about more than ‘women’s issues’. It also requires a feminist approach to economic and foreign policy. And, despite some promising comments about the need to reform social security, which has historically disadvantaged women, President Clinton will unquestionably fall short.

But she will draw on historically unmatched experience in gender-focused lawmaking and activism, she will listen to the concerns of marginalised women and she will by her presence change the tone of American politics.

Even on her worst day, the nasty woman is better than the shameless misogynist.

3 Responses to “Donald Trump saw a nasty woman — what do feminists see?”