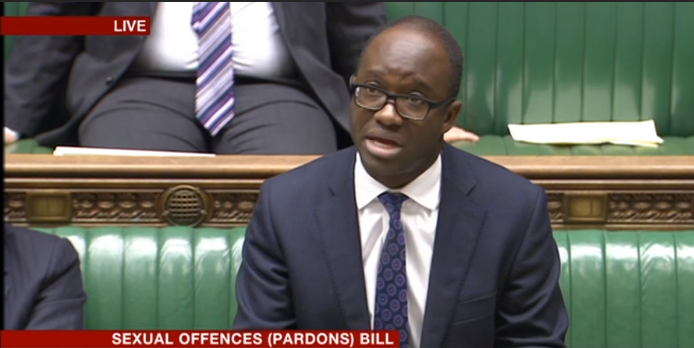 A private members bill aiming to erase the criminal records of gay men convicted of now-defunct sexual offences was talked out by Tories in the House of Commons this afternoon.

MPs shouted at Conservative minister Sam Gyimah to sit down as the cut-off time for SNP MP David Nicolson’s bill approached. However, the justice minister continued to speak, a vote was not called and the bill fell. If passed, it would have cleared the way for a pardon of nearly 50,000 men living with convictions for consensual homosexual activity.

Bitter scenes from the Commons as #TuringBill runs out of time as minister speaks pic.twitter.com/h1qZjSGAT0

Gyimah claimed that the government had already fulfilled its manifesto commitment to formally pardon those convicted under now-abolished laws, firstly by introducing a posthumous pardoning process, and secondly by allowing gay men to apply to have their convictions disregarded.

The government argues that a blanket pardon could lead to some men being pardoned for actions that are still crimes today, although the bill included a clause excluding those convictions from the pardon.

Campaigners and MPs from across the opposition have slammed the filibuster.

“For years I have campaigned and fought for this moment and this could have been a hugely historic and proud day. Instead, it is adding further frustration and heartache to those affected and their families, not to mention the sheer embarrassment to this country.

It is 2016 and there are more than 75,000 people still convicted of just loving someone, it simply beggars belief! I am absolutely gutted and devastated at the result today, and completely ashamed of our government.”

Labour’s Wes Streeting, who intervened during Gyimah’s speech to warn him against talking the bill out, described the government’s actions as ‘a disgrace’.

Today @SamGyimah came to work to block a Bill to deliver justice for ppl imprisoned and chemically castrated for being gay. What a guy.

‘No tricks. No games’ is what the government told @MrJohnNicolson. Shameful and dishonourable behaviour from them today #TuringBill

The #TuringBill was a chance for the Tories to show they have moved on from the dark days of homophobic #section28. They utterly failed.

Earlier in the debate, Chris Bryant fought back tears as he argued for the bill, invoking the memory of gay parliamentarians who fought appeasement in the 1930s, but were dismissed by the government as ‘glamour boys’.