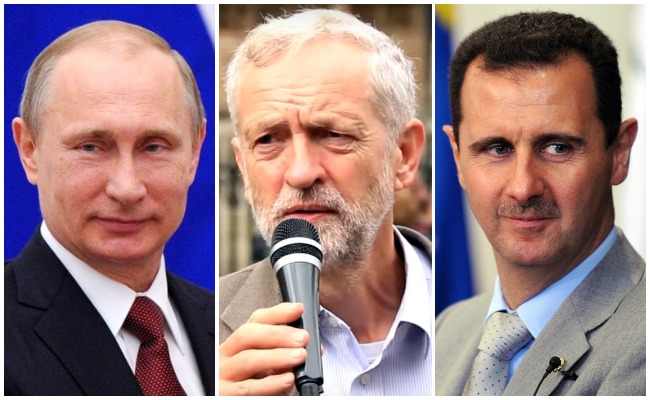 Jeremy Corbyn must ‘speak out on Syria’ and condemn Russia’s bombing of civilians, say Labour and Momentum activists in an open letter to the Labour leader and anti-war campaigner.

The letter’s signatories, who are supporters of Corbyn’s leadership, say they share his ‘opposition to militarism’ but reject the ‘false’ choice between backing war and doing nothing.

Corbyn has said he supports a negotiated settlement in Syria to end the war, but Syrian activists say he should condemn war crimes by the Assad regime and its ally Russia, and back humanitarian efforts.

The letter comes after Corbyn was heckled by protesters at a Stop the War Coalition event in London on Saturday.

‘We ask that you condemn, clearly and specifically, the actions of Assad and Russia in Syria, which have caused the overwhelming majority of civilian deaths and which present the biggest obstacle to any workable solution to the Syrian crisis.’

It also urges Corbyn to ‘lend your wholehearted support to practical measures to support civilians and pressure the regime to end its attacks, such as airdrops of aid to besieged civilians by British military forces’.

”Food not bombs’ should be the rallying cry, not ‘Hands off Syria’, which only gives the Assad regime and Russia carte blanche to continue with their slaughter.’

It was published under the name ‘Speak Out On Syria’ and shared by Syria Solidarity UK, and is signed by Labour Party members, Momentum activists, trade unionists and socialists.

You can read the full letter and list of signatories below:

JEREMY CORBYN: SPEAK OUT ON SYRIA!

An open letter to the Leader of the Labour Party from concerned Labour Party members, Momentum activists and socialists.

We agree wholeheartedly with your opposition to militarism and nuclear weapons, and your call for an end to British arms exports to countries such as Saudi Arabia.

Yet we are concerned by your silence – thus far – on the ongoing slaughter of civilians by Russian and Assad-regime forces in Syria.

We share your scepticism about kneejerk military responses to the situation in Syria, such as the bombing campaign against ISIS proposed by David Cameron last autumn.

We are not asking you to back Western interventions of this kind, but simply to say clearly and unequivocally that the actions of Assad and Russia in Syria are barbaric war crimes, and that you will seek to end them, and to hold their perpetrators to account.

We applaud your efforts, over decades, to end the crimes of brutal regimes supported by Western powers. But we do not believe that this exhausts the duties of anti-imperialists, socialists and peace activists in Western countries.

The fact that Assad is supported not by the USA or Britain, but by Russia and Iran, does not make his crimes any less horrific, or the political future he represents for the people of Syria any less dismal. Nor does it mean that Western political leaders are powerless in acting to oppose these crimes.

We know only too well that there are those in the anti-war movement who will denounce any move critical of Russia, Iran, or Assad as tantamount to support for Western imperialist intervention.

We also know that there are those on the right of British politics who will claim any such move as a concession to their policy of militaristic grandstanding.

The debate on Syria has been polarised between these two positions – scrupulous ‘non-intervention’ in the face of massive carnage enabled by Russian intervention, versus support for bombing campaigns as part of a Western ‘war on terror’. We have all been asked to take up a position in these terms. But the terms are false.

We appreciate your concern not to lend support to right-wing calls for fruitless bombing campaigns. But in the face of the horrors being perpetrated across Syria, with impunity, and above all by Russian and Assad-regime forces, we believe socialists and anti-war activists cannot simply look on in silence.

We ask that you condemn, clearly and specifically, the actions of Assad and Russia in Syria, which have caused the overwhelming majority of civilian deaths and which present the biggest obstacle to any workable solution to the Syrian crisis.

We also urge you to lend your wholehearted support to practical measures to support civilians and pressure the regime to end its attacks, such as airdrops of aid to besieged civilians by British military forces.

Guaranteeing delivery of humanitarian aid to civilians is not only a way to save the lives of hundreds of thousands of people at risk of disease and starvation.

It is also a non-violent and humanitarian way to pressure the regime into a negotiated political solution to the conflict, by undermining a key part of its strategy: the ‘kneel or starve’ campaigns deployed against opposition areas since 2013.

‘Food not bombs’ should be the rallying cry, not ‘Hands off Syria’, which only gives the Assad regime and Russia carte blanche to continue with their slaughter.

Failure to act on this issue now threatens to undermine practically and politically much of the work done over many years by the anti-war movement. The legacy of yourself and the anti-war movement over Syria must not be one of silence and inaction in the face of such momentous atrocities.

Ashley Inglis, member of the Labour Party and Stop the War Coalition

Brian Parkin, member of rs21 and UCU, University of Leeds