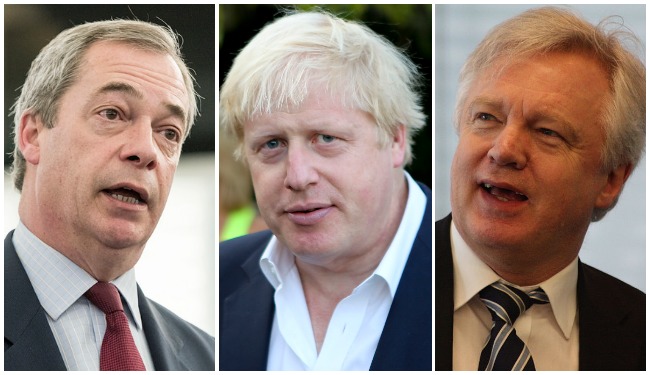 Since the British people ‘took back control’ and stuck it to the elites on June 23, the pound has fallen to a 31 year low. While the Brexit press has tried to spin this as a good thing, the facts tell a different story.

As the Institute for Fiscal Studies (IFS) finds today, a weak pound means rising prices, which would be bad enough for low-income people. But since we have a Tory government, this inflation comes amid a freeze on benefits and tax credits, as part a £12 billion cut to social security spending.

This means 11.5 million families will see an even greater real terms cut to their incomes as a result of sterling’s nose dive. Thanks Brexit!

How much worse off will they be?

Well, take a look at this graph: 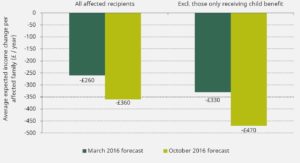 A benefits freeze would have cut incomes for those 11.5 million families on average by four per cent, losing them £260 per year, and saving the government £3 billion.

But given the latest inflation forecast, this jumps to six per cent, costing those families £360 per year, and saving the government an extra £1.2 billion.

In other words, Tories plus Brexit equals £100 less for 11.5 million low-income families.

It gets worse. As the IFS puts it:

“Greater losses are found among families – typically those on lower incomes – who receive more in benefits.

For example, ignoring the 3.2 million families who only receive child benefit, the average loss from higher inflation rises to £140 per year (from £330 to £470).”

You can read that off the right-hand side of the graph above.

While Brexit has meant giving pro-Brexit politicians more ‘control’ than they know what to do with, it will drive some of the poorest families in Britain – in whose name those politicians claim to speak – further into poverty.

This is an appalling betrayal. Many of those families will have voted Leave on the explicit promise of having more money, not less. (And no, it’s not ‘unpatriotic moaning’ to say so.)

As the IFS notes, ‘there is a reason that benefits are uprated in line with prices by default – since one purpose of benefits is to provide a minimum standard of living, their level should reflect the cost of purchasing the goods and services required to provide that minimum standard.’

“While it is perfectly reasonable to argue – as the 2015 Conservative Party manifesto did – that the working age benefit system should be made less generous over this parliament, it is hard to see why the appropriate size of cut should be arbitrarily determined by the impact of movements in sterling on prices.”

It’s so hard to see, in fact, that one could even suspect the answer doesn’t exist. This benefit freeze should be scrapped.

In the words of Lib Dem treasury spokesperson Susan Kramer, doing so is ‘morally necessary’, as well as the only sensible economic policy – assuming of course Theresa May wants to avoid a recession.

The alternative is to continue to slash incomes at a time of rising prices and economic wobble, and pray it doesn’t stunt GDP.

Thank heavens Britain avoided economic chaos by not voting for Ed Miliband last year. We really dodged a bullet on that one.

See: Forget the Daily Mail: Four reasons MPs should have a proper say on Brexit